Jurmala City invites to the Resort Festival on May 26 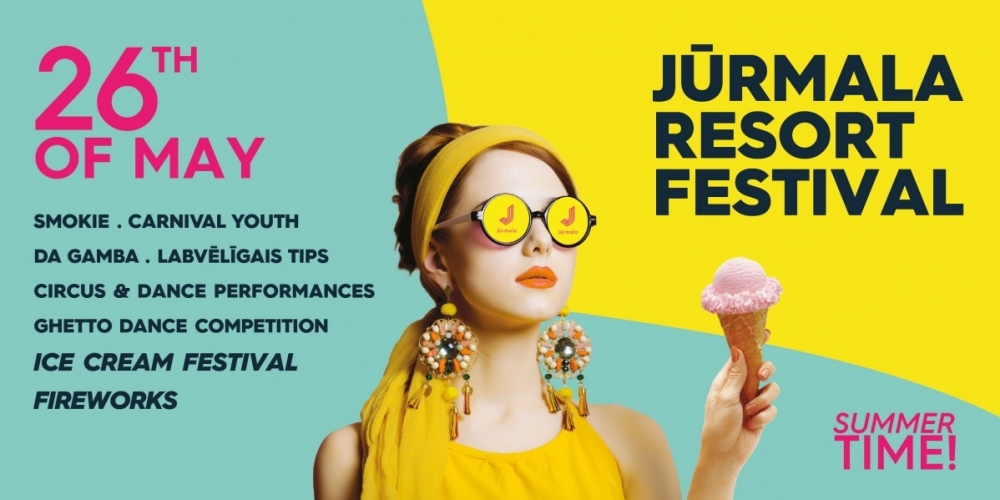 The wide holiday program of the resort will mark the beginning of summer in Jurmala on May 26. Jurmala invites you to visit the largest Ice Cream Festival in Latvia, to watch International Circus and Dance Theater performances, Street dance competitions, to participate in Salsa and Latin master classes and to listen to the concerts of "Carnival Youth", "Labvēlīgais Tips" and other musicians and groups. At the peak of the Festival on Majori Beach, the legendary British band "Smokie" and the attractive instrumental group "Dagamba" will perform on the big stage.

This year's Resort Festival program is much wider and more varied - in general, the event will take place in six locations, both in the city and on the beach.

The Festival in the resort city will end on Majori Beach, where the legendary British group "Smokie" will perform on the big stage. On the seaside, there will be such popular and known songs as "Livin' Next Door To Alice", "Don’t Play Your Rock'n'Roll To Me", as well as songs from the latest album. At the end of the evening, the audience will be inspired by the music band "Dagamba", which impresses with the contemporary sounds of classical musical instruments combined with spectacular rhythms. At the end of the evening - fireworks on Majori Beach.

The most delicious summer season in the Dzintari beach is Ice Cream Festival. Throughout the day, you will be able to enjoy ice cream, desserts and cocktails from popular brands such as “Pols”, “Ekselence”, “Tio”, “Kārums” and “Rasēns”, at great prices with family and friends. You will also be able to get lost with cold delicacies from different home-made Latvian companies and vote for the new Jurmala ice cream flavor. This year's Ice Cream Festival will be accompanied by great music - the popular indie-rock band “Carnival Youth”, singer Elza Rozentāle and Evilena Protektor, as well as the attractive “MC orķestris” will perform.

On the beach, in the gap between Dzintari to Majori, throughout the day, will be the most talented street dancers who will show their mastery in two categories - hip hop and popping - in the international street dance competition "Ghetto Dance Jurmala Battle". An international street dance jury will judge participants. The audience will be warmed up by a DJ and beatmaker K-EY from Jelgava. The event will be led by founder and promoter of Ghetto Dance - Tarass Leočko.

At the Dzintari Concert Hall, the "Riga Circus School" will invite both children and adults to participate in the world of manipulation of objects - everyone will have the opportunity to learn juggling with scarves, dishes or balls. Carousel Company from Estonia, especially for children and young people, has created a contemporary circus show "Carousel Night”. The "Etta Ermini Dance Theater" from UK will entertain visitors with the "Roadworks" show, featuring elements of acrobatics, break, contemporary dance, circus and theater performances. During the festivities, the historic Dzintari Concert Hall will be open for visitors.

The Festival will be hosted by the acoustic guitar master Kaspars Zemītis, musician and composer Jēkabs Nīmanis, along with percussionist Ernests Mediņš, Chris Noah, the music bands “Pacific K” and “Cotton Island”, as well as the new singer Tīna Šipkēvica.

One of the oldest and most beautiful traditions of the summer season is the procession of the Resort Festival. Every year, thousands of Jurmala inhabitants from several generations, go to the streets of the resort city to greet guests of the city with gorgeous outfits and performances. Participants of the tour on Majori beach will be accompanied by musical performances by the new domestic group "Sudden Lights" and the popular musical association "Labvēlīgais Tips". Also this year, the most attractive team of participants will receive the Jurmala City Cup made by sculptor Olga Šilova.

For the first time at the Resort Festival - foreign embassies

The embassies and representations of the eleven countries - Canada, Estonia, France, Georgia, Hungary, Italy, Israel, Lithuania, Moldova, Sweden and Uzbekistan - will also be at the Resort Festivity. The celebration guests will be able to test their knowledge in competitions and games, as well as get acquainted with national characteristic drinks and music in front of Dzintari Concert Hall.

Latino rhythms on the beach

There are various activities for young people and families with children all day long on the beach of Dzintari and Majori. On the big stage DJ VJ Enrique Fabregas from Cuba will perform. At the Resort Festival Enrique will delight visitors with the summer rhythms of Latin and club music. Also on the beach you will be able to take part in dance master classes where you will have the opportunity to master the salsa, mambo, rumba and other basic steps of dances.
Sand artists on the beach will make large-scale works of art from the sand of Jurmala. Everyone will be able to take part in the sand- workshop and create his own mandala, paintings and other works. The beach will also host the only “Ghetto football” tournament this summer.

Families with children in the Dzintari forest park will be able to compete in a domino game, build towers of blocks as well as try out and learn minigolf, corn hole, stairs golf and other games.

All activities and performances at Jurmala Resort Festivity is free of charge.