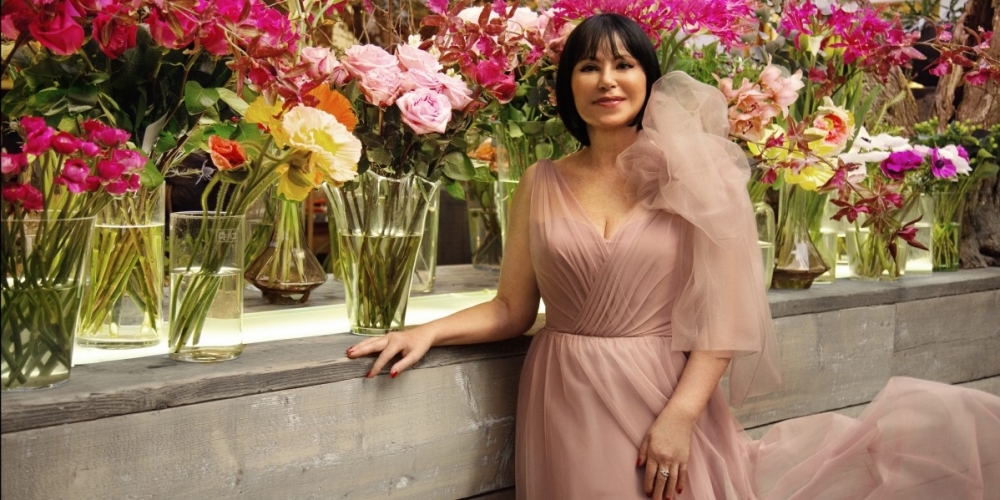 One of the most famous international music festivals in Latvia "Summertime – Inese Galante & friends", will mark its 15th anniversary this summer, from 5 to 11 August.

It will bring the brightest latino, jazz, rock-n-roll, funk, Balkan and classical music stars to Dzintari Concert Hall. Traditionally, the legendary festival, inspired by the world-famous opera diva Inese Galante, has become the culmination of the summer concert season in Jurmala.

A special gift to the audience will be the performance of the queen of French jazz – Mina Agossi. Her music includes world music, and blues, and jazz, and even rock — such an “explosive mix” puts the singer above all the characteristics and musical patterns. One more bright surprise for the loyal friends and guests of the festival on this day will be the performance of the authors of the soundtrack to the cult film “The Hunger Games” – a world renown band from the USA – Hypnotic Brass Ensemble. The artists have featured stars such as Prince, Snoop Dogg, Blur, Gorillaz and others.
A special sense of festivity, along with a dose of carelessness this evening will be provided by the concert presenter and an old friend of the festival – Valters Krauze. Traditionally, the laureates of the “Inese Galante's Talents” contest will perform at the grand opening concert of the festival, raising a smile of delight on the faces of the listeners with their touching performances.

Hot Latin American music rhythms and special interpretations in “Colombian style” will be heard in a light-hearted concert of the band Puerto Candelaria on August 6, at the Dzintari concert Hall in the framework of the anniversary year’s international music festival "Summertime – Inese Galante & Friends". Puerto Candelaria will visit Latvia for the first time to perform specially at the summer festival of Inese Galante in Jurmala with a completely new musical show.
Virtuosos from sunny Colombia are widely known outside their homeland’s borders – the magnificent band members’ energy lifts up the mood of thousands of visitors at the concerts across all continents of the world, letting them dance and dream about eternal summer. The music of Puerto Candelaria is based on a widely known Colombian music rhythm full of fantasy and marvellous spirit that raises the feelings and bright emotions in listeners all over the world.

More about the musicians: www.puertocandelaria.com/

Kusturica – a hero of our time who doesn't need to be introduced. His enormous talent and substandard view of the world is expressed not only in his brilliant movies but also in his unique and colourful music.
With a keen mix of rock’n’roll, Balkan punk rock, folk jazz, gypsy motives, Turkish marches, and Asian tunes, Kusturica delivers the cultural code of his homeland to the rest of the world. The colourful motives of the Balkans, characterized by an open-hearted mind and ability to have genuine pleasure, the love for freedom and a strong spirit, millions of Kusturica’s admirers can feel thanks to his extraordinary personality and fabulous concerts, performed together with the band The No Smoking Orchestra, where Kusturica himself plays the bass guitar and sometimes acts as a soloist.

Stephen Ridley's performance at the Dzintari Concert Hall in the framework of anniversary year’s festival "Summertime – Inese Galante & Friends" will feasibly become the most emotional solo concert in Jurmala. The expressive and vivid show of Stephen Ridley, the charismatic showman from the United Kingdom, will provide the guests of Jurmala with unforgettable emotions. This won't be a traditional concert, but a solo show of one talented actor masterly combining vocal and piano performance in a passionate "dance".
Having said goodbye to a wealthy banker’s life, the gifted and virtuoso pianist once pushed out the piano on the street and began to play. In his 29 years, Stephen has managed to conquer the leading world music stages and earn international appreciation from audiences and music critics. Stephen Ridley's performance captivates from the first minute, thanks to the musician's ability to sense music and deliver his feelings and emotions to the audience. The artist admits that music is more visible than audible to him and dreams about influencing the lives of millions with his art.

More about the musician: http://stephen-ridley.co.uk/

Two world-renowned Russian jazz musicians, endowed with incredible charisma and masterful piano skills - Daniil Kramer and Denis Mazhukov - will come together on the stage of Dzintari Concert Hall, allowing listeners to dive into a jazz and rock-and-roll atmosphere full of emotional freedom and musical enjoyment. The artists in the fullest sense of the words – undergo their every performance and reveal that they are united by true and unfeigned love for music and their calling.
Denis Mazhukov, the only musician in Russia who had the honour to record the album in the legendary recording studio Sun Records in Memphis, at the birthplace of rock'n'roll. Daniil Kramer – a unique representative of Russian jazz, one of the main bearers of jazz music worldwide and a man from the Guinness book of records. “We get a kick out of being on the stage and it's felt by everyone in the hall. Jazz and rock'n'roll are like a father and son. Rock'n'roll: a genius child of jazz. We invite everyone who wants to get younger in their souls and gain strong mental health to this concert."

For the admirers of the best world’s classical music, the patroness of the festival Inese Galante has prepared a unique concert, inspired by the love for Jurmala, spectators, and art. On August 10, the owner of the tenderly velvet voice and unique piano technique will perform together with the Vienna opera soloist and brilliant baritone - Martin Achrainer and a filigree piano-playing technique’s possessor - Greta Erharter-Sargsyan from Austria.
In the Small hall of Dzintari Concert Hall specifically selected and beloved lyrical melodies, emotional opera arias, and duets about love will be heard. The concert – "Inese Galante – with love to Jurmala" – is a unique opportunity to enjoy real opera masterpieces in an uncharacteristic environment for opera. In the hall where, thanks to its unique acoustics, the opera's vocals sound intensely intimate and at the same time - noble, the audience will be able to enjoy truly great and sensitive music in a deeply cordial and virtuoso performance.

The music of a stylish band from Amsterdam BRUUT! performing in Groove, Funk, Smooth Jazz genres refers listeners to the cult films by Tarantino, always trendy vinyl records and favourite westerns. Their sunny music soaked with the spirit of freedom of Amsterdam is a special cocktail in the spirit of the 60s with an admixture of dance and surf. This quartet will perform in Latvia for the first time and will prove to the Latvian public that " BRUUT! was invented for dancing!". They balance between recognizable hits and unpolished improvisation, combining music in their concerts, to which it is impossible to sit still, it’s the kind that you listen to with bated breath.
The concert program will be complemented by an original and extravagant show from Latvia - Perpetuum Ritmico (percussions) together with Duende flamenco dancers will travel the audience to warm Spanish countries presenting their rhythmic music and elegant dance symbiosis.

This year, the gala concert "Gala Galante" will be even more special – in honour of the anniversary of Inese Galante’s festival, the organisers have prepared a special programme and a series of surprises. A truly musical and aesthetic enjoyment and a dose of positive emotions awaits the guests: the gala concert programme will provide a variety of genres – from the favourite classics to the amazing symbiosis of music styles – and, as always, a glorious and stunning display of new and powerful musical performances.
On August 11, during the festival’s “Summertime – Inese Galante & Friends” gala concert the brightest Latvian and foreign stars along with the young talents – winners of the Inese Galante's Talents' contest will perform. In the concert “Gala Galante” guests will have the unique opportunity to hear the compilation of stars - performers and musicians: the baritone from the Vienna opera Martin Achrainer, the well-known Latvian countertenor Sergejs Jegers, the famous Latvian pianist Andrejs Osokins and singer Intars Busulis and, of course, the festival's muse and world-renowned opera diva Inese Galante (soprano). During the evening, two Russian showmen and piano geniuses – Daniil Kramer and Denis Mazhukov – will come together on the stage of Dzintari Concert Hall, and the band Bruut! from Amsterdam playing groove, funk and smooth jazz, whose performance at the anniversary year’s festival will become a vivid discovery for Latvian public.

All gala concert performances will be accompanied by the Festival orchestra that has been an integral part of Inese Galante's music festival for 15 years, where particularly for the festival the best Latvian musicians have joined together under the leadership of its permanent conductor - Ekhart Wycik, from Germany. "Gala Galante" concert guests will also be conventionally delighted by the winners of the Inese Galante's Talents contest. Young talents will once again surprise the audience with their growing mastery, make them smile and feel a sense of pride for such a talented young generation of our country.