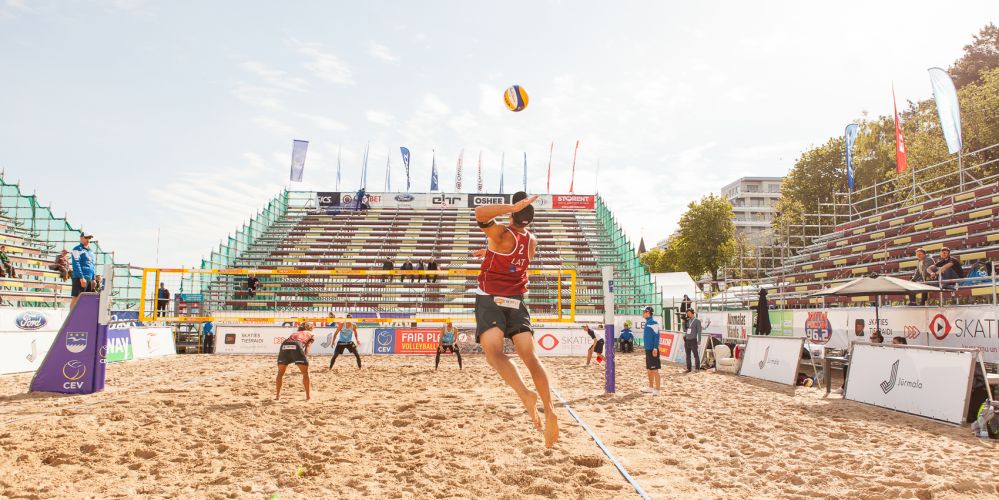 The 2016 CEV European Championship in beach volleyball “Jurmala Masters” takes place from the 1st to 4th of September in the Jurmala beach centre.

During the championship volleyball fans have an opportunity to observe beach volleyball games of the highest level, and also engage in various entertainment activities.

Pre-sale tickets are available online: www.bezrindas.lv; tickets will be sold in the championship's venue from the evening of September 2nd. It is recommended to buy tickets in advance, because the number of seats in the stadium is limited.

The first three days (August 31st - September 2nd), when the national selection, qualification and main draw group games will take place, there is no entrance fee. Whereas on Saturday and Sunday (September 3rd and 4th), during the play-off, semi-final and final games, you must purchase tickets for the games taking place in the 2800 seat central stadium. Games in other areas will be free of charge for spectators.

The ticket price, when purchasing it for two days is 20 EUR. By purchasing a ticket, visitors are guaranteed entrance to the stands throughout the day. Children under 7 years of age have free entrance, without taking up a separate seat. Wheelchair-bound disabled persons and their companion may buy a single ticket. Children from 7 to 12 years of age have a 50% discount on tickets; proof of identity must be shown on entrance.

You can also follow the Championship on your mobile phones, TV and on the Internet. Anyone interested is be able to watch the tournament's quarter-finals (Latvian duos’ games), semi-finals and finals in Latvia on the TV 6 channel and on the TV Play (skaties.lv) website, whereas viewers around the world will be able to watch the broadcast on the international Internet TV channel "laola1.tv". The Latvian athletes' other games, starting with Friday's group face-off, is available for viewing exclusively on the LMT network via mobile phones and on the m.lmt.lv website, as well as delfi.lv and sportacentrs.com.

“Jurmala Masters” is included in the International Volleyball Federation's (FIVB) 2016 official calendar and the beach volleyball international tournament system. This year the best Latvian women's duo - Tina Graudina and Paula Neciporuka will also be participating in the championship and competing for the total prize fund of 50 000 EUR, as well as the top Latvian male duo - Aleksandrs Samoilovs and Janis Smedins.