A A
75%
100%
125%
Kontrasts
Entrance fee for vehicles! Remember to by Jūrmala entry pass.
Entry pass
See and DoPoints of interestRoutes

Buļļuciems is located in the eastern part of Jūrmala, at the mouth of the Lielupe river in the Gulf of Riga. Its name (“Bull Village”) originated from the name of Buļļi Manor (Bullenhof). After the Lielupe river broke free into the sea in 1755 and formed an estuary in that location, the Buļļi manor grounds were divided into two parts.
Most of the Buļļi residents were fishermen. It was only in 1910 that the manor lands between the streets of  Tīklu, Loču and Vikingu were divided for summer house construction. Unlike other swimming areas, Buļļi was a quiet place of leisure favoured by the actors of Riga theatres at the beginning of the 20th century. 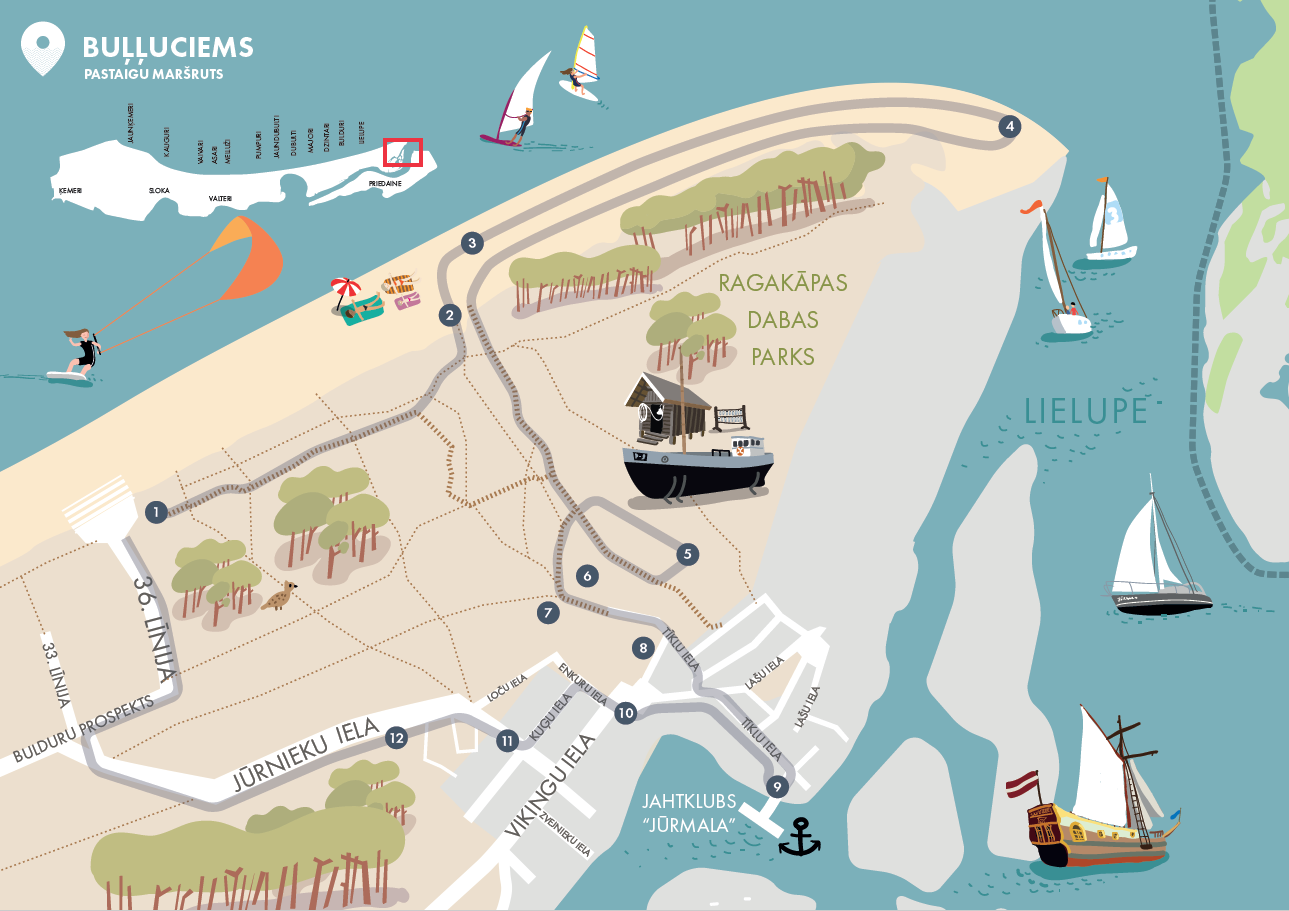 1. Ragakāpa Nature Park
The Ragakāpa dune is a relatively recently-formed dune that has formed over the past 300 years. It is 12-17 m high, 800 m long and 100 m wide. Even at the beginning of the 20th century the area was still a plain of wandering white sand dunes. The process was gradually stopped by planting pines, which can grow in such difficult coastal conditions. To preserve the pine forest dunes and coastal nature at the mouth of the Lielupe River, the “Ragākapa” nature park was created in 1962, where some trees are even more than 300 years old. The park contains 21 specially protected species in Latvia: eight species of plants, one mushroom, eight insects and four birds.
Two nature trails wind through the park with information stands, benches, and viewing platforms with recreation areas. Walks through such pine groves are healthy, as the sun rays fall through the tall pine trees, warming the air and helping it become saturated with the phytoncides from the pine needles. 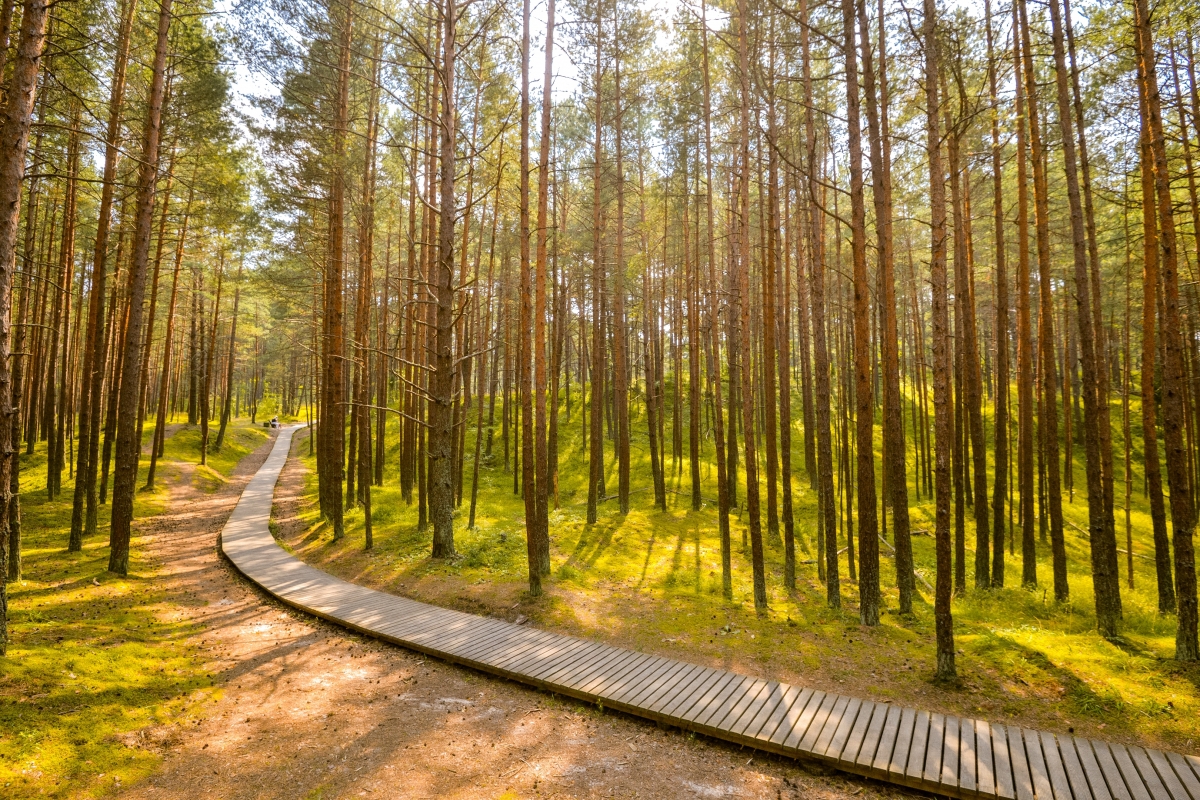 2. Tourism object “Boat” (“Laiva”)
The beautiful, brightly coloured boat is a popular object with which not only the guests of Jūrmala, but also the city's residents themselves like to take pictures during their walks along the seaside. At the same time, this beautiful boat serves as a marker for the beginning of the Ragakāpa nature trail, which is located right across, at the begining of the forest. Object available only during summer season. 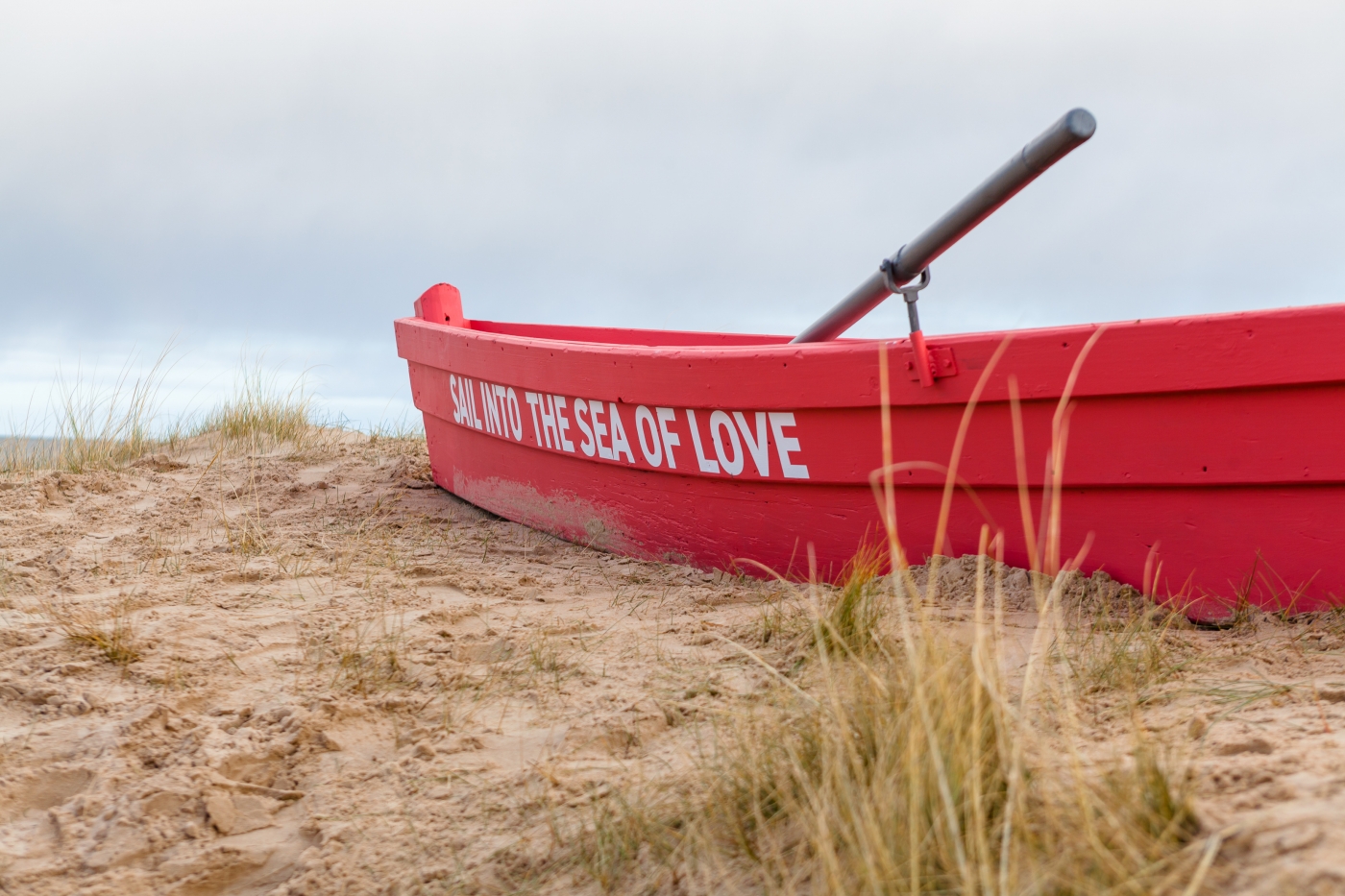 3. The Seaside and Dunes
The 24 km long Jūrmala beach is unique not only thanks to the white quartz sand, but also its spaciousness. Sunbathing near the dunes not only lets you enjoy a shade of pine trees, but also a private, pleasant session of aromatherapy. The Jūrmala beach is divided into peaceful and active recreation areas and equipped with an infrastructure for every convenience of its visitors: seaside benches, changing cabins, free toilets, showers, and foot rinsing stations, boardwalks at the trail exits, and children's playgrounds.
Although for Latvians dunes usually don't seem very special, many parts of the world don't have any dunes at all. For many species of plants and animals, dunes are the only suitable habitat. The undergrowth in dunes is very fragile. Once destroyed, it takes a very long time to recover, so it is forbidden to enter the dunes by vehicle, build campfires or set up tents. The dunes on the seashore have formed over several centuries. 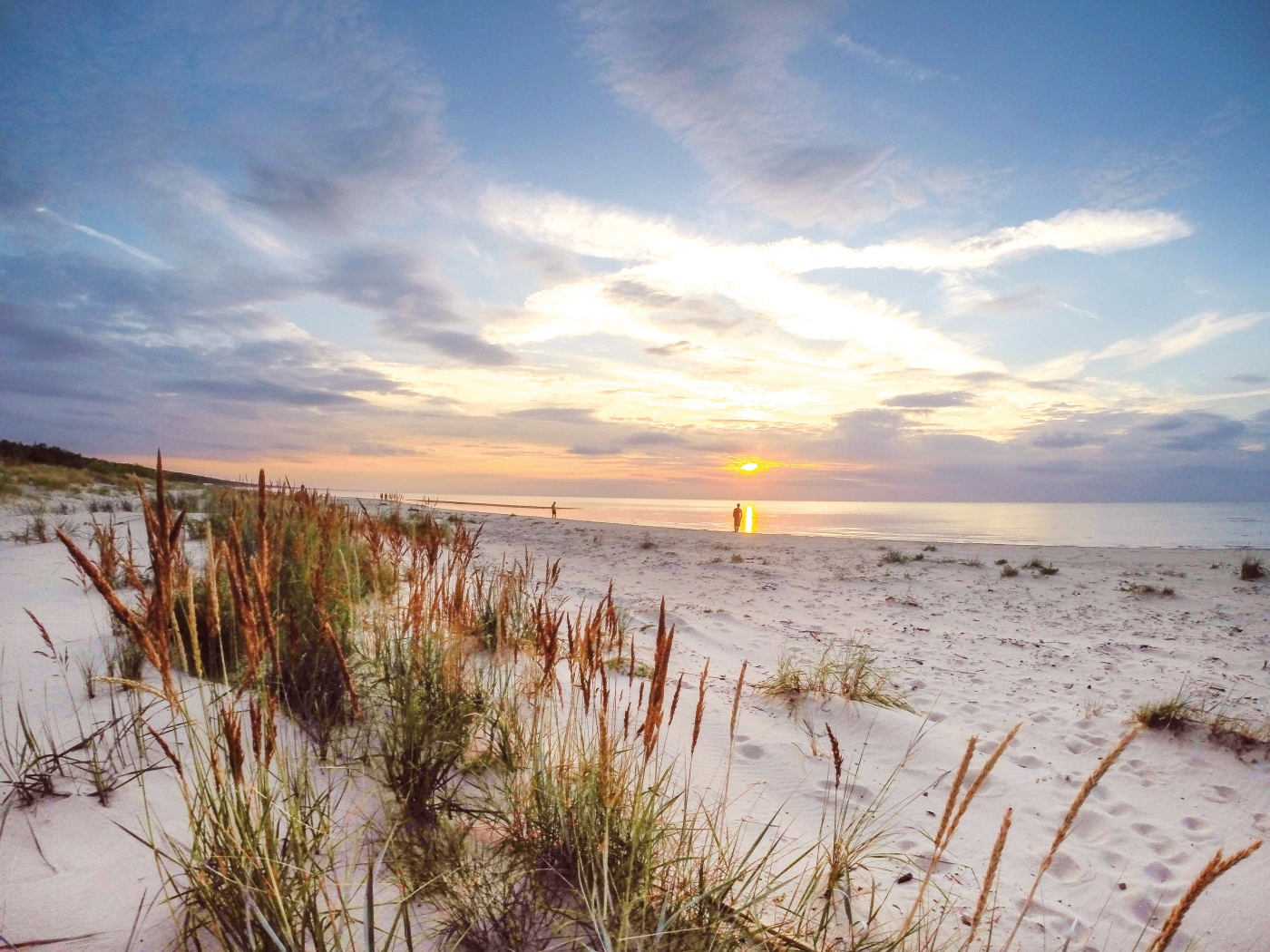 4. The Mouth of Lielupe River in the Sea
The current mouth of the Lielupe River was formed in 1755. Its 300 m long land strip and its vast bare dunes are often called The Edge of The World, and here you can enjoy a true peace and quiet. Historically, a nude beach developed in the relatively quiet and secluded part of the seaside. In the 20s and 30s of the 20th century, nude sunbathing enthusiasts also frequently visited beaches in Dzintari and Bulduri, but later moved to a more secluded location near the mouth of the Lielupe River. 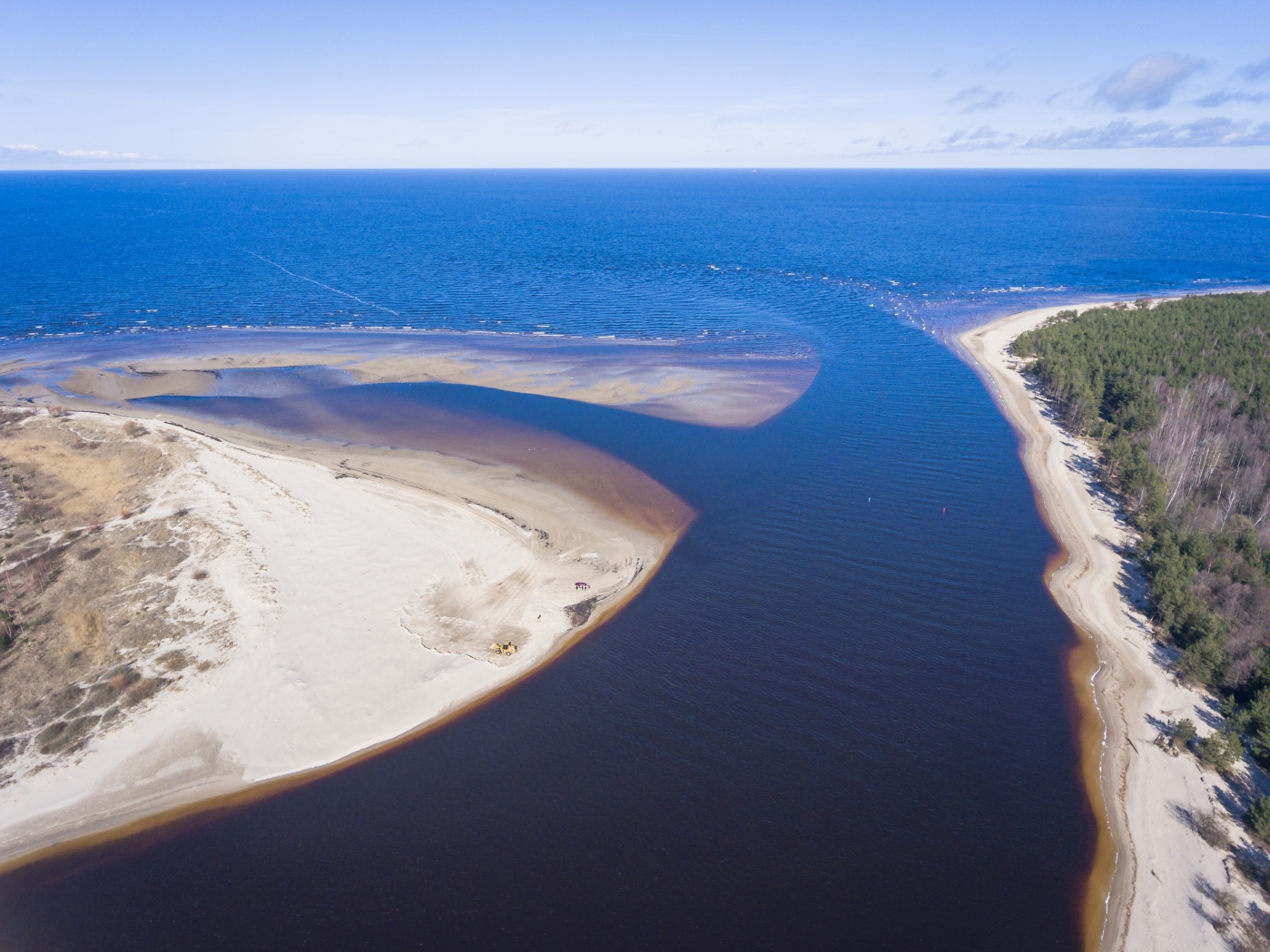 5. The King of Ragakāpa
In the Ragakāpa Nature Park, on the northeastern slope of the dune you can see a particularly impressive ancient tree: a pine called The King (with a trunk circumference of 308 cm). Once, a Queen also stood next to the King (with a trunk circumference of 318 cm), but it had already lived a long and happy life, so now a smaller pine, called The Princess grows in its place. Naturally formed coniferous tree forests are a treasure that needs to be preserved, since they serve as the only refuge for many rare plant and animal species.

6. Jūrmala Open Air Museum
The museum was founded in 1970 as a Public museum of the fishing kolkhoz “Uzvara”. The open-air museum exposition consists of a late 19th and early 20th century coastal fisherman's farm, with its characteristic buildings (main house, barn, net shed, a smokehouse for fish, bathhouse and other buildings), brought from various Jūrmala's fishing villages, as well as old fishing boats and various fishing tools. This is the largest and most interesting museum in Jurmala, which reveals the daily historical life of fishermen in Jūrmala in a very engaging way. A campfire with firewood and picnic areas are available for an additional fee.
Open: Tue.- Sun.: 10:00–17:00 (until 18:00 during the summer season). Entrance is free of charge. Address: Tīklu iela 1A. T. +371 67754909; www.jbmuzejs.lv 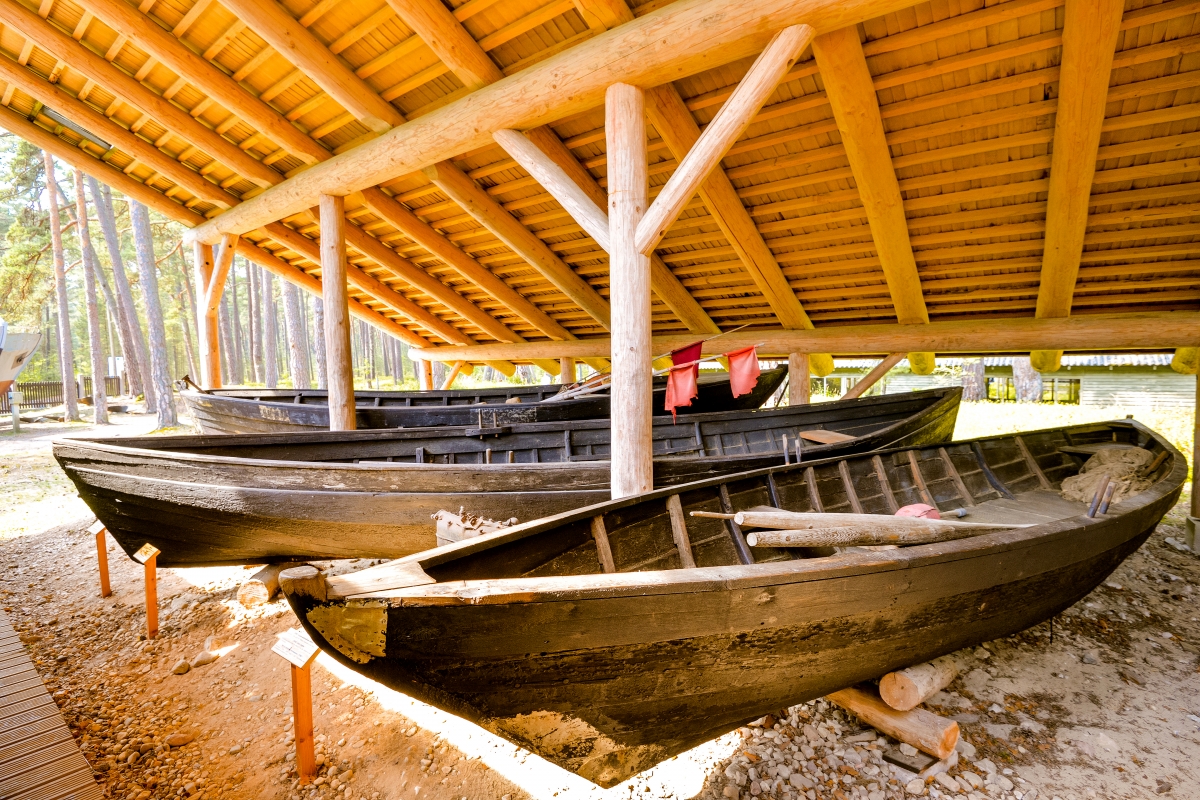 The club was built in 2016 to promote the development of water tourism in Jūrmala. It contains berths for yachts and motor boats, and you can also rent a row boat or a SUP board here. From here you can enjoy a view of the magnificent White Dune – a specially protected nature area on the opposite bank of the Lielupe River.
Tīklu iela 10; jurmalasosta.lv. Address: Tīklu iela 10; jurmalasosta.lv 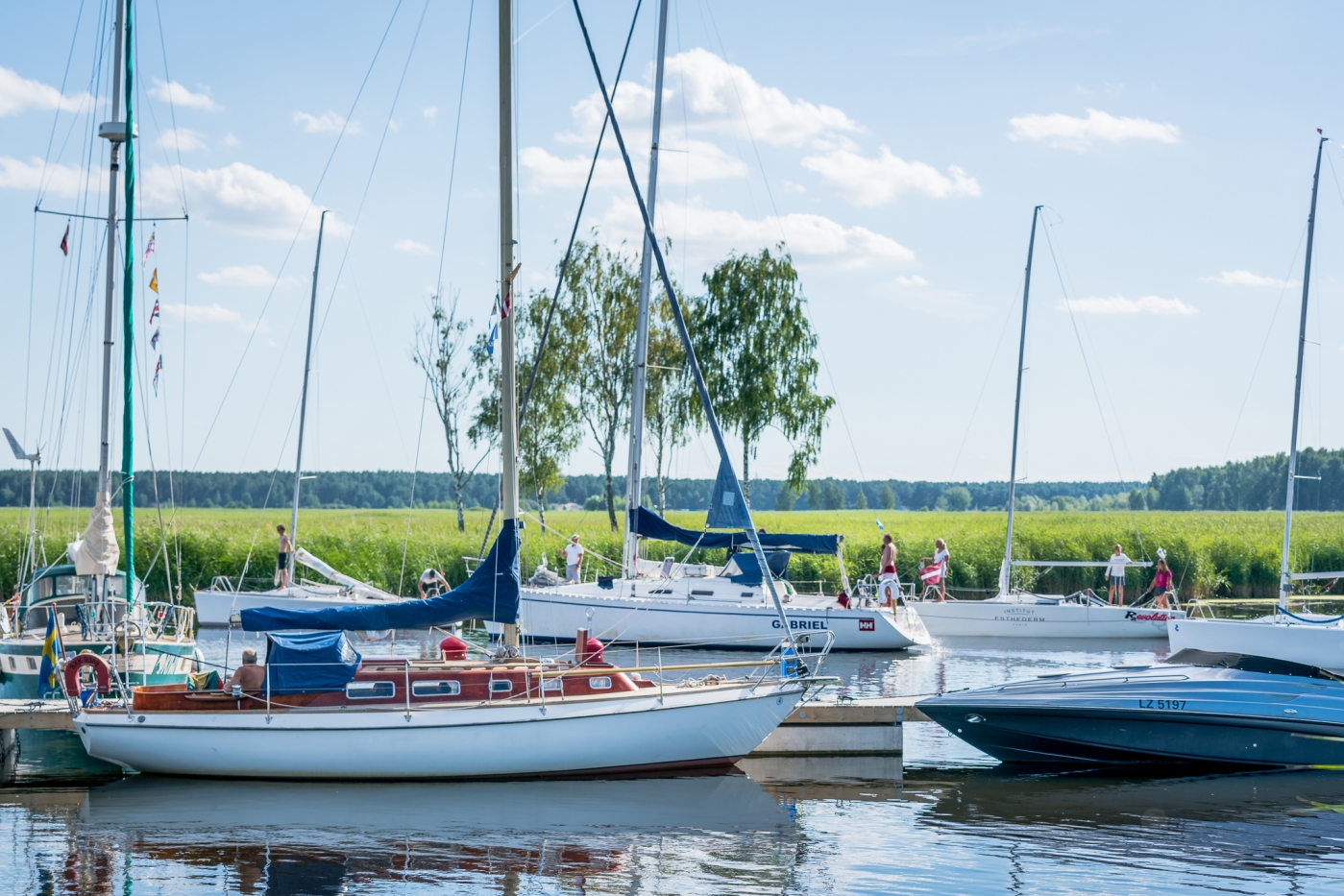 10. Kuģu iela 9
A local architectural monument built during the 1920s.

11. Jūrnieku iela
A smooth paved road leading through the pine forest of the Ragakāpa Nature Park. Pedestrians should note that even though the traffic here is not intense, it is still a roadway, so it is safer to walk on the trail alongside it.