A A
75%
100%
125%
Kontrasts
Entrance fee for vehicles! Remember to by Jūrmala entry pass.
Entry pass
See and DoPoints of interestRoutes 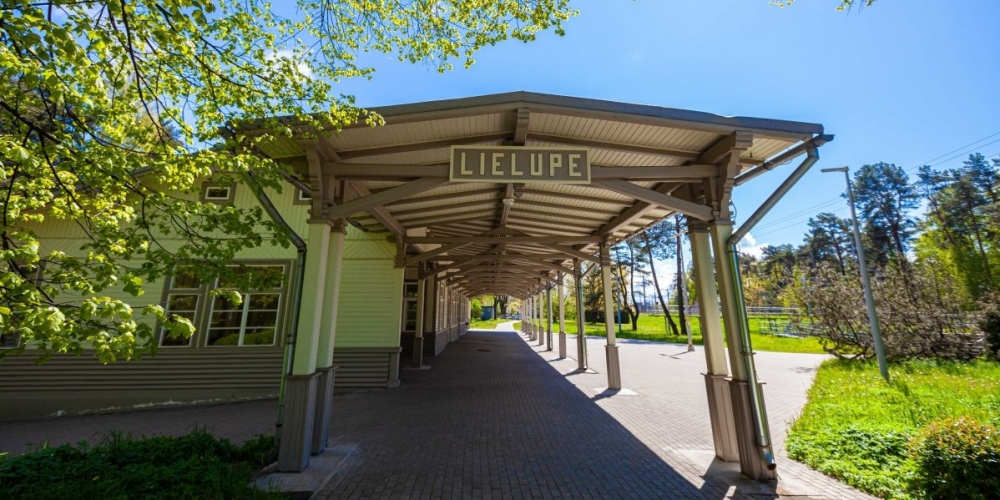 Pearls of Historical Architecture and Destinies of Remarkable People.

As the economy improved, construction of impressive mansions and villas flourished in Jūrmala. During the 1920s and 30s, the so-called Lielupe summer cottage colony was formed on the lands of Bulduri Manor, and eminent Latvian science, art and culture workers, such as state presidents Jānis Čakste and Gustavs Zemgals, composer Jānis Zālitis, book publisher Jānis Roze, doctor Pauls Stradiņš, architect Indriķis Blankenburgs, and many other great Latvian minds started building their summer cottages in Lielupe, or the so-called “Far Jūrmala”.  The buildings in this territory fully reveal the architectural features of residential buildings in Riga Jūrmala at the time of the independent State of Latvia. The spectrum of architectural styles includes both Classicism and Neo-Gothic style, as well as National Romantic style and Functionalism. Currently, many of these buildings are declared local or national architectural monuments. 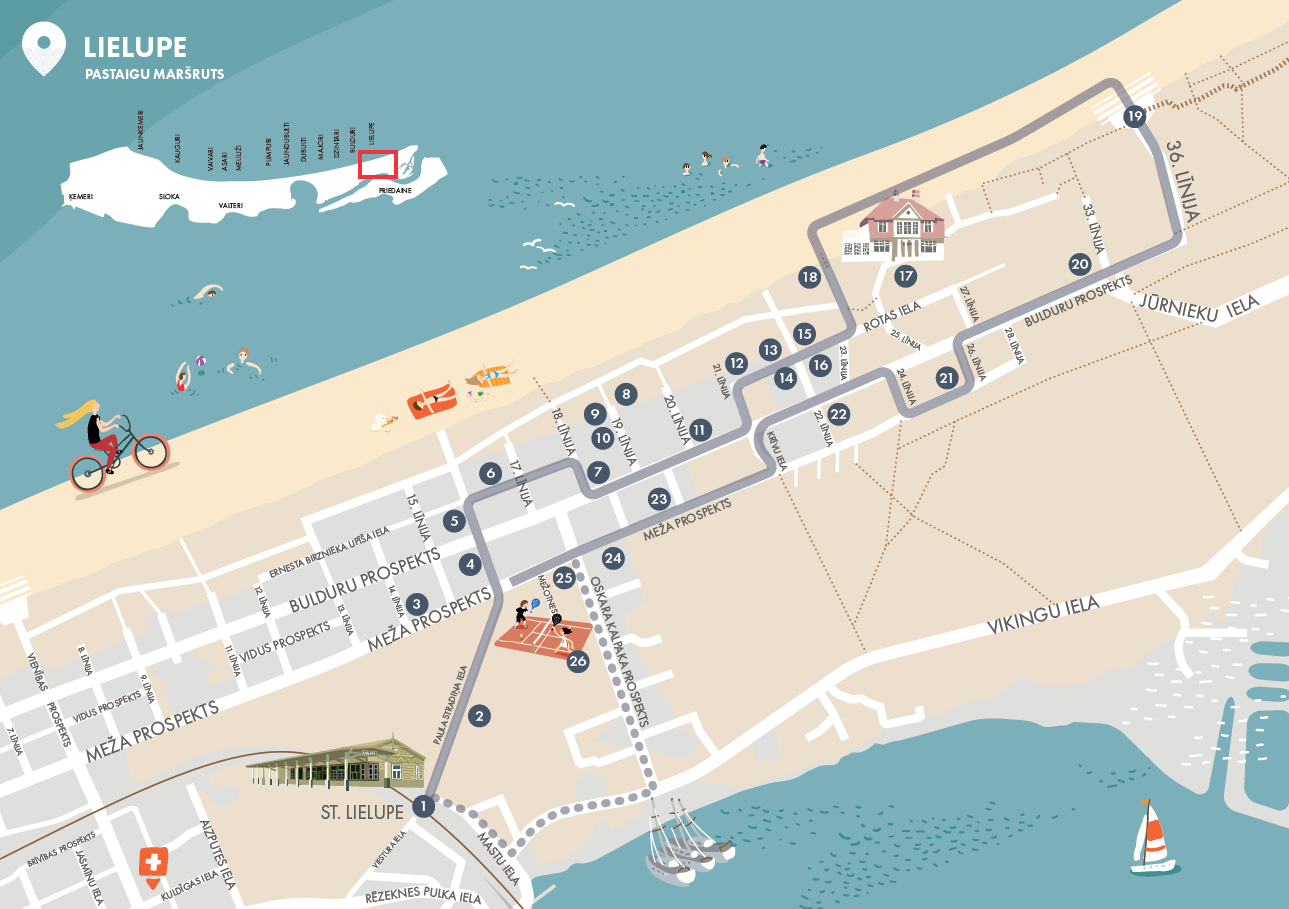 1. Railway station “Lielupe”
The station building is an architectural monument; built in 1913 next to the railway line opened in 1877 for the convenience of fishermen and holidaymakers. Until 1932 the station, along with the surrounding district was called “Buļļi”. This is one of the oldest railway station wooden buildings in Jūrmala, which has survived to this day and is still functioning. 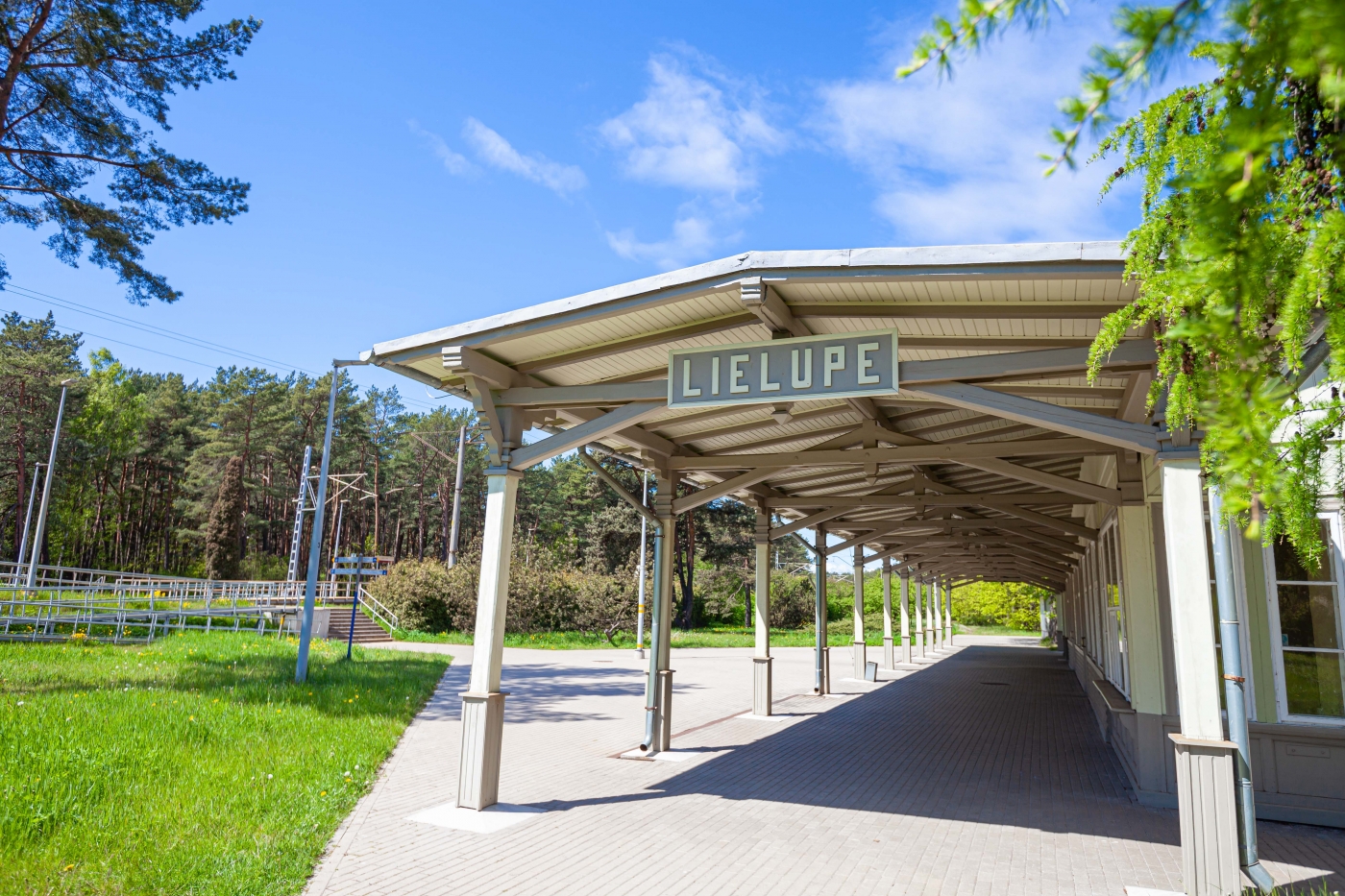 2. The Lielupe cemetery
The cemetery is enclosed by an impressive stone fence with two distinctive features: wooden lathing and a beautiful entrance gate. Many outstanding minds of Latvian science, art, and culture rest here.
When entering through the cemetery gates, on the left there are tombstones made by Niklāvs Strunke in the family cemetery of the famous bookseller Jānis Roze (1878-1942). Nearby, you will also notice a large tombstone with philosophical engravings on the grave of the outstanding Latvian organist Tālivaldis Deksnis (1946-2018) and a 1962 memorial sculpture called “Two Muses” by the sculptor Kārlis Zemdega on the graves of the literary scholars Antons Birkerts (1876-1971) and Pēteris Birkerts (1881-1956). Not far away you will also find the resting place of the Latvian writer Ernests Birznieks-Upītis (1871–1960). 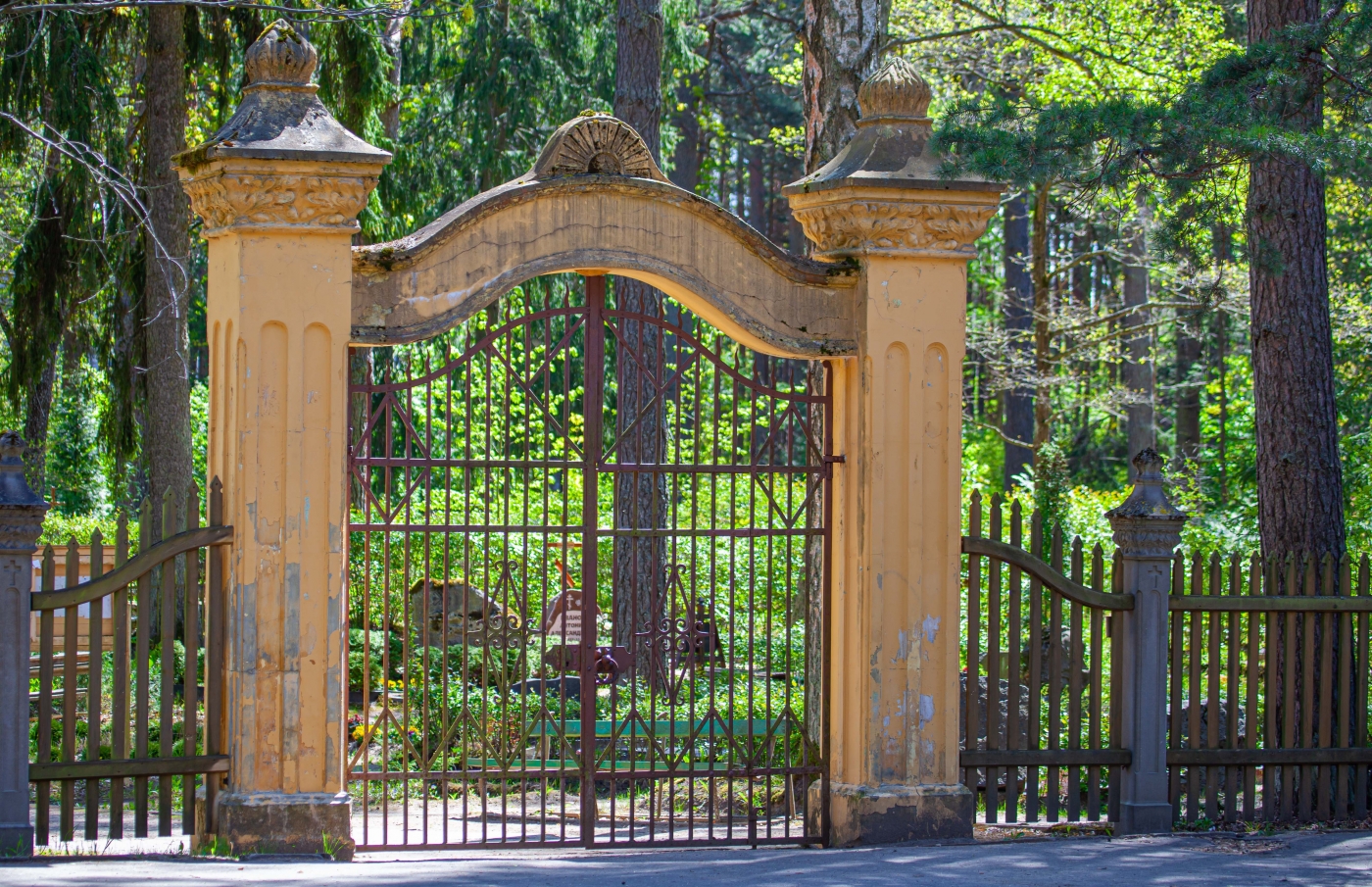 3. Meža prospekts 77
National monument of architecture. The building was built in 1927 after a project by the architect Dāvids Zariņš. This was the home of the publisher Jānis Roze (1878–1942) until his deportation on 14 June 1941.
Jānis Roze was one of the most prominent Latvian publishers during the period of 1920s-1940s. At the start of the First World War, he acquired a printing house and in 1919 he founded the publishing company “Jāņa Rozes apgāds” and opened a bookshop. Works by Latvian writers, textbooks and calendars were published in highly artistic printing techniques. In 1927 he built his family home in Lielupe. In 1941 Jānis Roze was deported to the Solikamsk labour camp with his family, where he died in 1942.

5. Bulduru prospekts 79
Architectural monument. The building was constructed in 1909 in National Romantic style according to the design project by the architect Heinz Pirang. 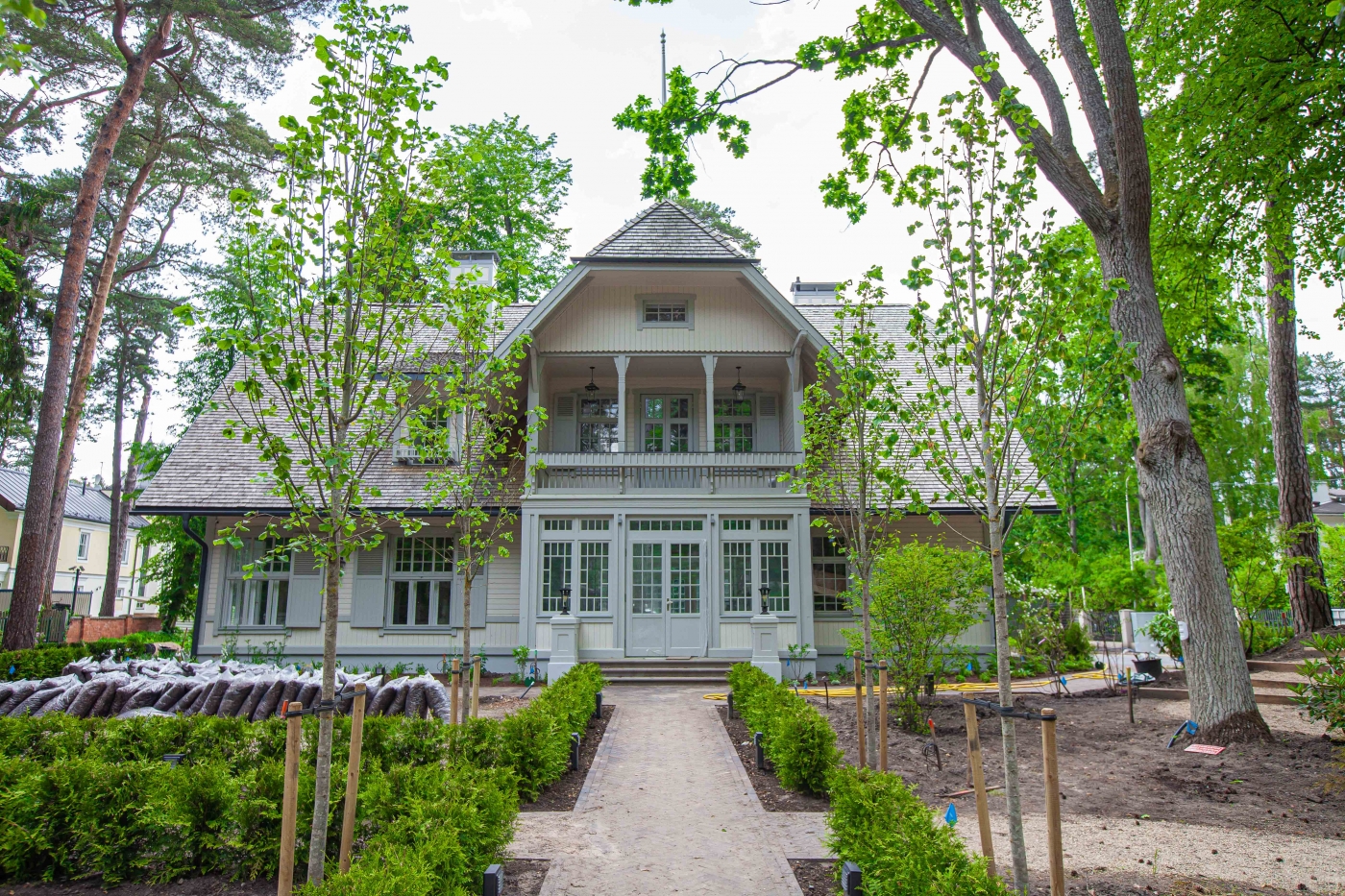 6. Ernesta Birznieka-Upīša iela 15
The building is difficult to see from the street, as it is located on the far end of the land plot. National monument of history. The prominent Latvian literary scholars and brothers Antons Birkerts (1876–1971) and Pēteris Birkerts (1881–1956) once lived in this building. It is curious that the street was named after their close friend and writer Ernests Birznieks-Upītis, who stayed on the second floor of the building over the summers of 1943-1957.

8. 19. līnija 1
National monument of architecture. This distinctly Classical building was constructed in 1928 after the project by the famous architect Eižens Laube as a summer house for the public figure Jānis Dāvis (1867-1959).
Jānis Dāvis was well known as a successful Latvian real estate entrepreneur as well as publicist, educator and leader of the Temperance movement. He compiled several textbooks and his alphabet book was taken as an example by future authors. He was also a great patron: he donated land for the construction of several schools and granted property to the University of Latvia. 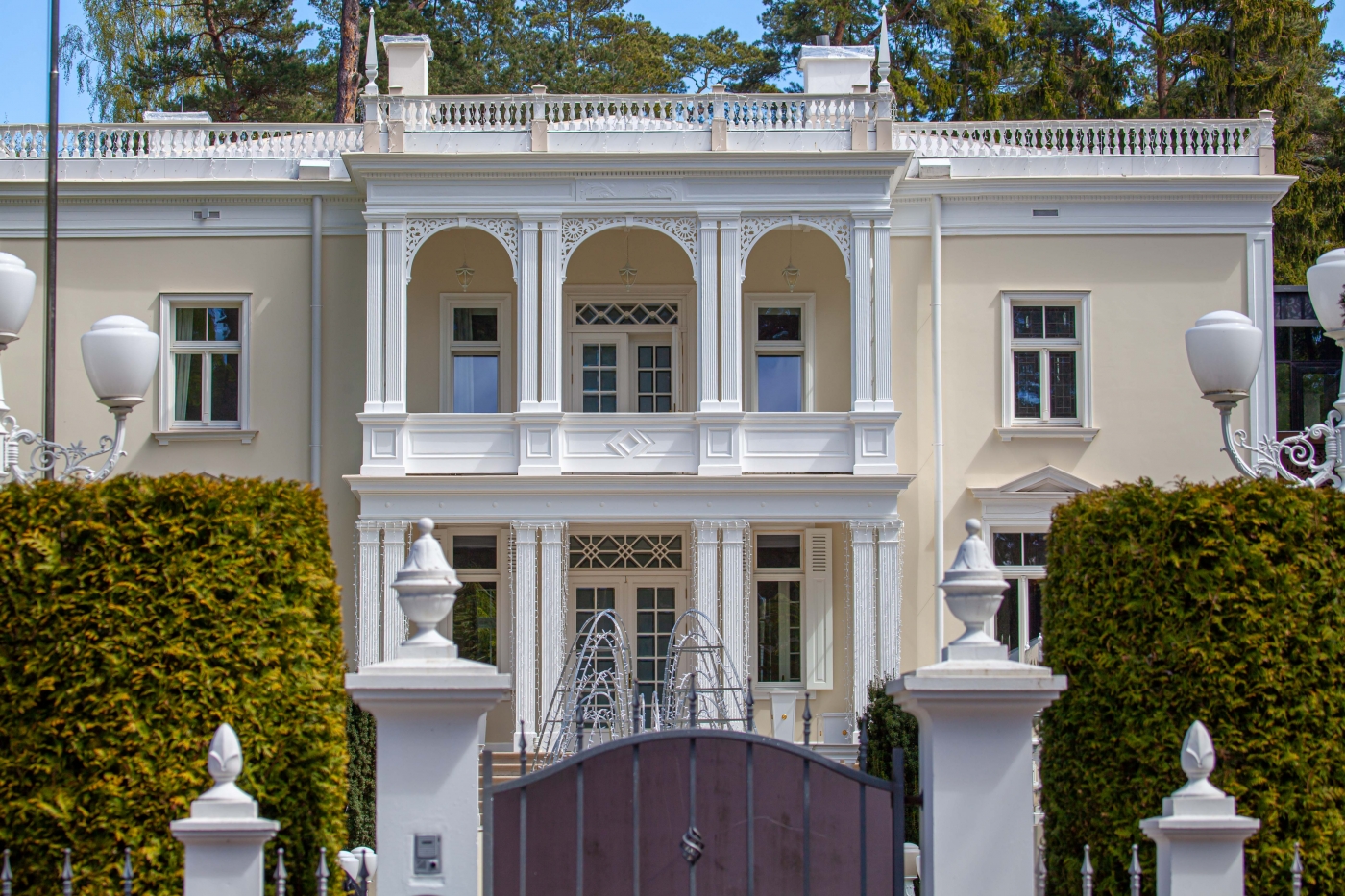 9. 19. līnija 2
20th century architectural monument. Under the influence of Art Nouveau, it was constructed with an asymmetrical volume composition and details in the new National Romantic style. The building is characterized by a small, tower-shaped corner construction with a wide divided Art Nouveau style veranda. 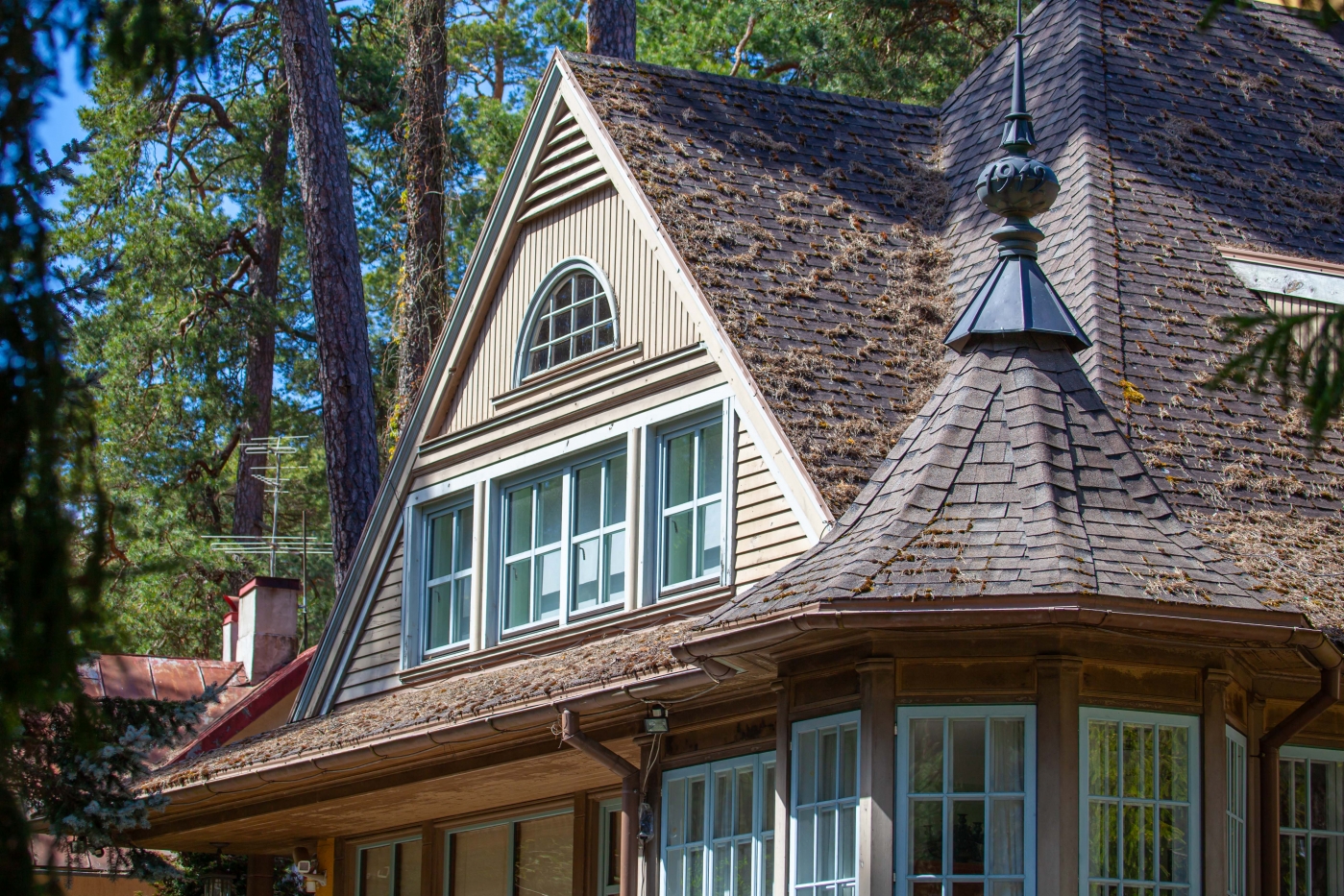 12. Bulduru prospekts 105
National monument of architecture. This Functionalist style building was constructed in the 1920s.

13. Rotas iela 1
The building was constructed in the 1930s according to the design created by Eižens Laube. This building was once home to Arvīds Kalniņš (1894–1981), a professor, chemist, and public figure.
In 1925, when the Lielupe summer house colony was formed, Arvīds Kalniņš was also involved in its organisation. He participated in the creation and manufacturing of the tuberculosis treatment “PASS” and the antibacterial treatment “Furacilin”. He actively participated in the Latvian chess life, and was one of the organisers of the 1937 and 1939 international tournaments in Ķemeri. 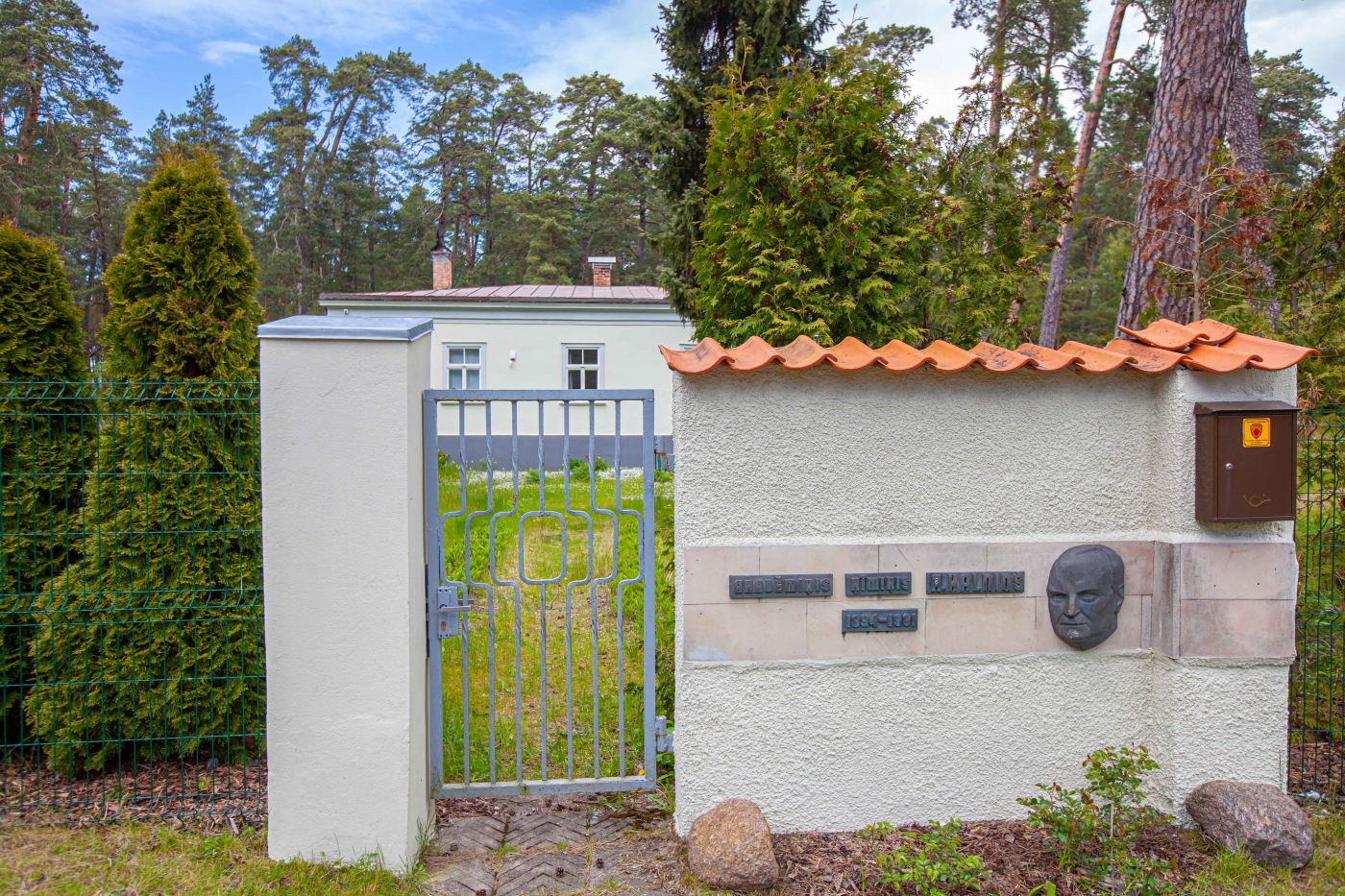 14. Rotas iela 3
National monument of architecture. This Historical and Art Deco style building was constructed in 1929 according to the design created by the architect Eižens Laube. The building's special charm is derived from its octagon-shaped tower and pointed Neo-Gothic windows, as well as its Neoclassical balustrade. A geometric garden with a classic fountain once stood in front of the building. 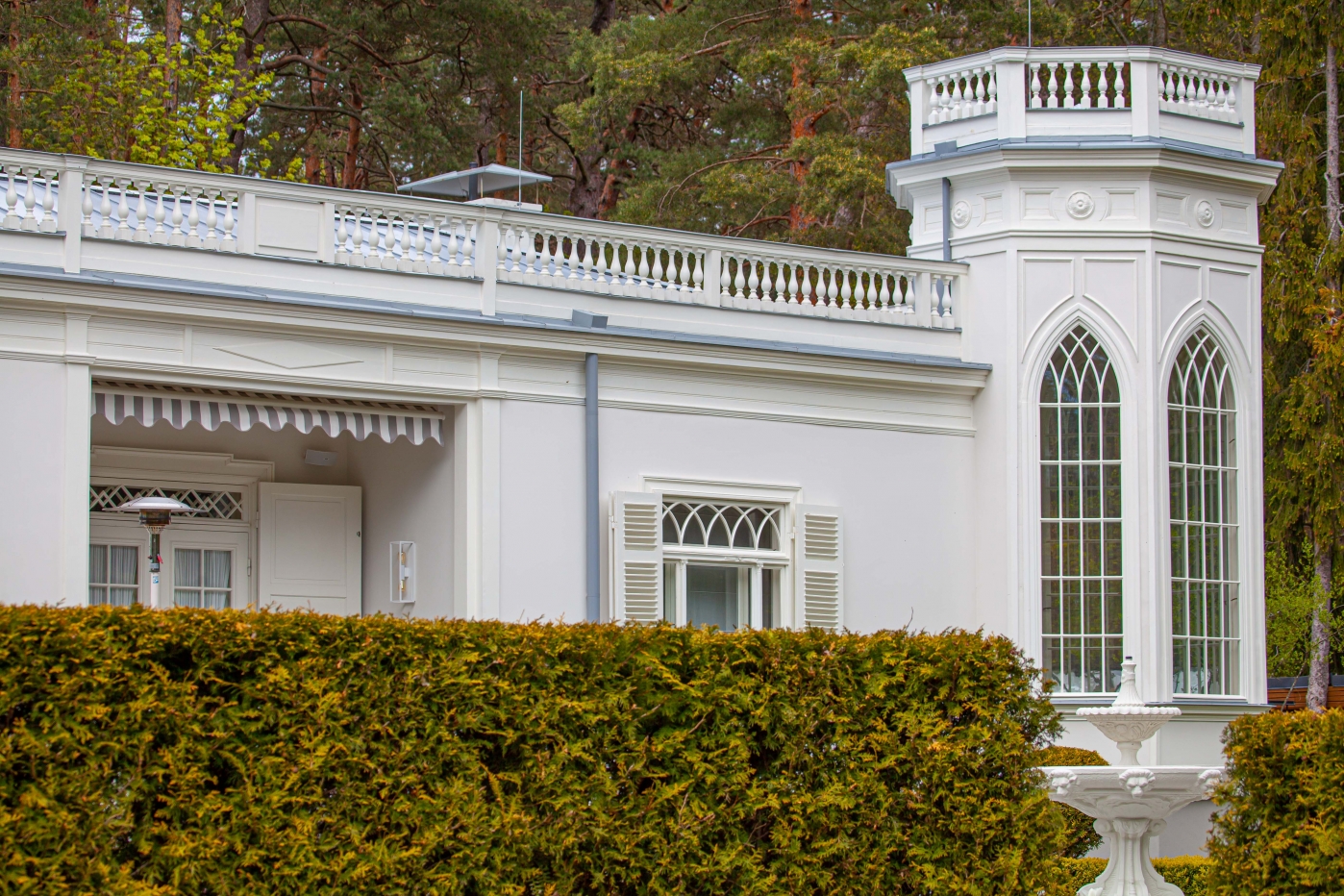 15. Rotas iela 4
National monument of architecture. The National Romantic style building was constructed in the 1930s. 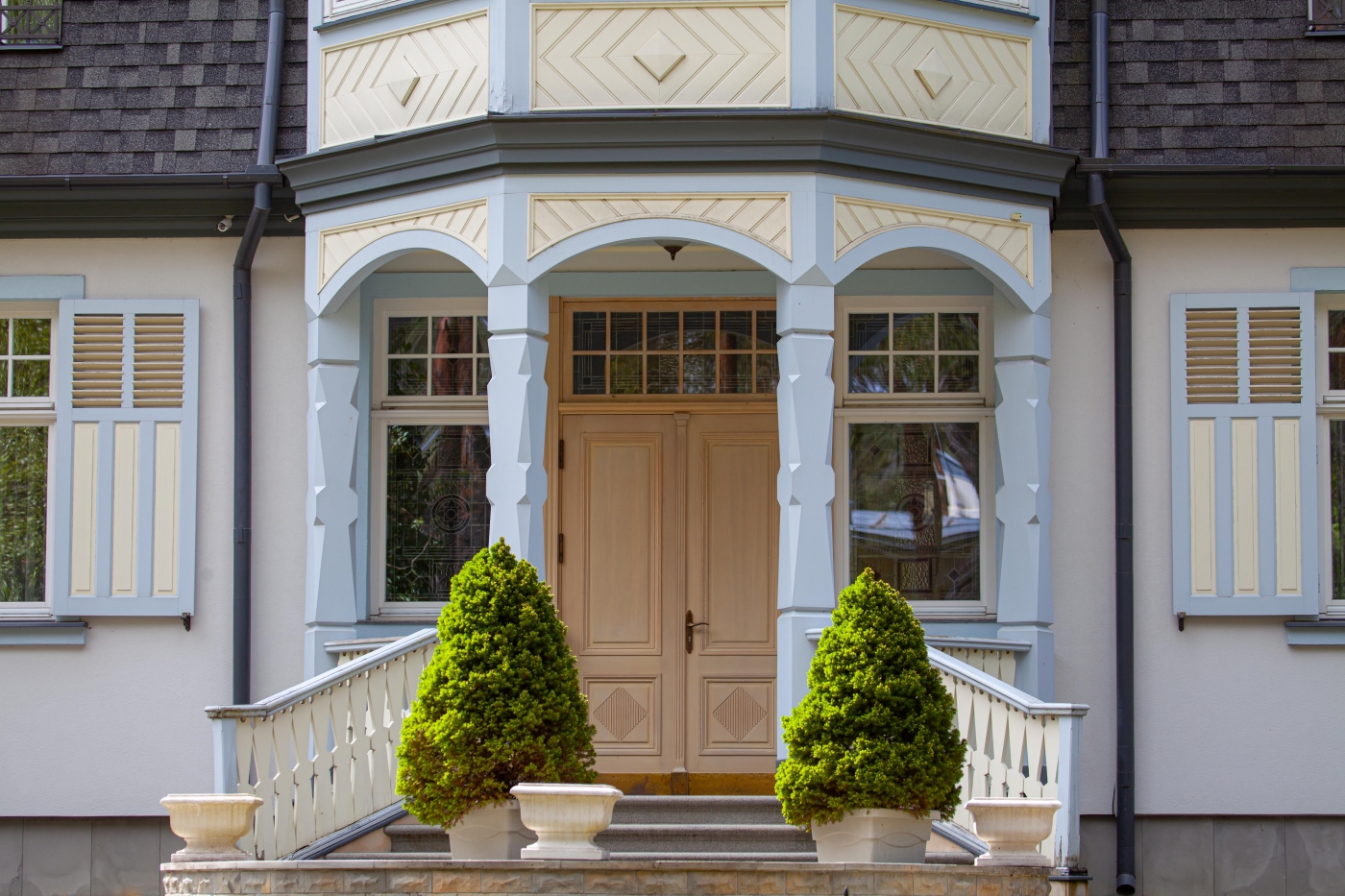 16. Rotas iela 5
This building was once home to the legal scientist, politician, and participant of the resistance movement of the Second World War Konstantīns Čakste (1901–1945). He bought the land on Rotas iela in 1932 and after a few years constructed a summer cottage there. In 2001, a memorial plate was placed at the building to mark the 100th anniversary of Konstantīns Čakste.
Konstantīns Čakste was born in Bulduri, in the family of the first president of Latvia, Jānis Čakste. During the 1930s he was an assistant professor at the Civil Law and Trade Law Departments of the University of Latvia. On 13 August 1943 he was voted the chairman of the Latvian Central Council. In 1944 he was arrested and sent to a German concentration camp, where he died in 1945.

17. Rotas iela 8
Local monument of architecture. The National Romantic style building was constructed in the 1930s. 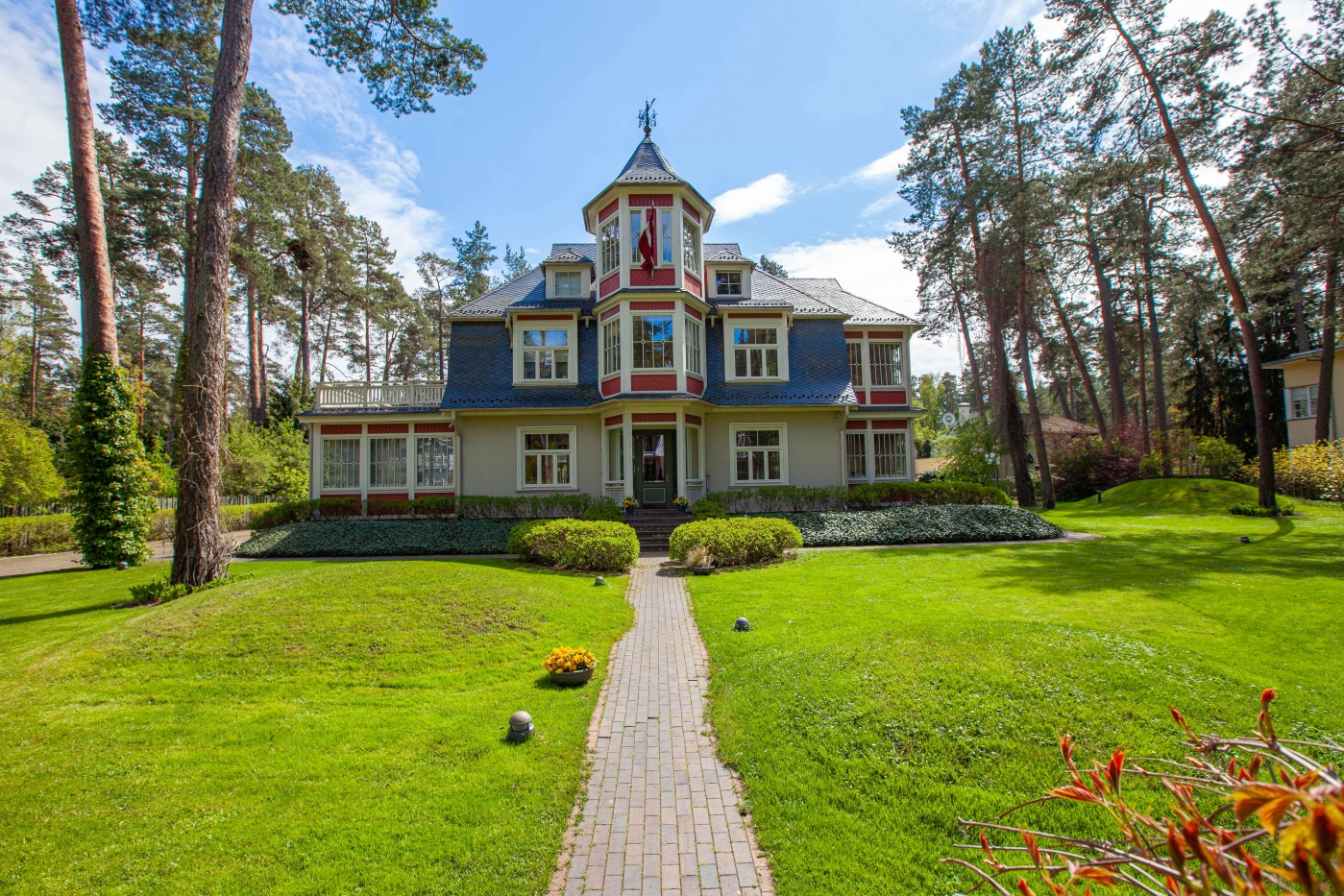 18. Rotas iela 15
Architectural monument. The building was once the residence of Latvian painter and writer Raimonds Staprāns. It was built in the 1930s as a two-story wood and plaster house with a veranda and two balconies.

19. The Lielupe Lighthouse
The only lighthouse in Jūrmala. Built in 1956. The lighthouse building is a lattice tower clad in red and white boards. It is 28 metres high, its focal height is 36 metres and its visibility is 16 nautical miles. The flashing light is white and lights up every 3.5 seconds for 1.5 seconds. 20. 36. līnija (“Ragakāpa” Nature Park)
The territory of the Ragakāpa Nature Park is located on the coast of the Gulf of Riga and extends from Bulduri to the mouth of the Lielupe river. The Ragakāpa Nature Park is a specially protected nature area, which was formed in 1962 to preserve the old dune pine forests and the diversity of the coastal nature. The park contains several specially protected species in Latvia: eight species of plants, one mushroom, eight insects and four birds. It even contains 340-year old pine trees and one of the highest (17 m) dunes in Latvia. The park has two boardwalk nature trails, one of which connects the parking lot on 36. līnija with the Jūrmala Open-Air Museum.

21. Bulduru prospekts 135
Architectural monument. This Neoclassical two-story wooden building with a sculpturesque volume composition is a typical example of Jūrmala's villa architecture. The building was constructed around 1910 as the summer cottage of Dmitry Sverbeev, Governor-General of Courland. During the period of independent Latvia it was acquired by Jānis Benjamiņš, the son of publisher Antons Benjamiņš. The building is currently owned by the Ministry of Foreign Affairs of Latvia and is rented for diplomatic purposes by the embassy of the Russian Federation in Latvia.

22. Meza prospekts 131
National monument of architecture. This building was constructed in 1934 according to the design created by Indriķis Blankenburgs. The building was designed according to the German Heimatschutz architecture style. The asymmetric two-story composition is complete with different rhythms of windows and Portico columns. The building has a carefully considered, ergonomic planning, and its interior design and fireplace are monuments of art. 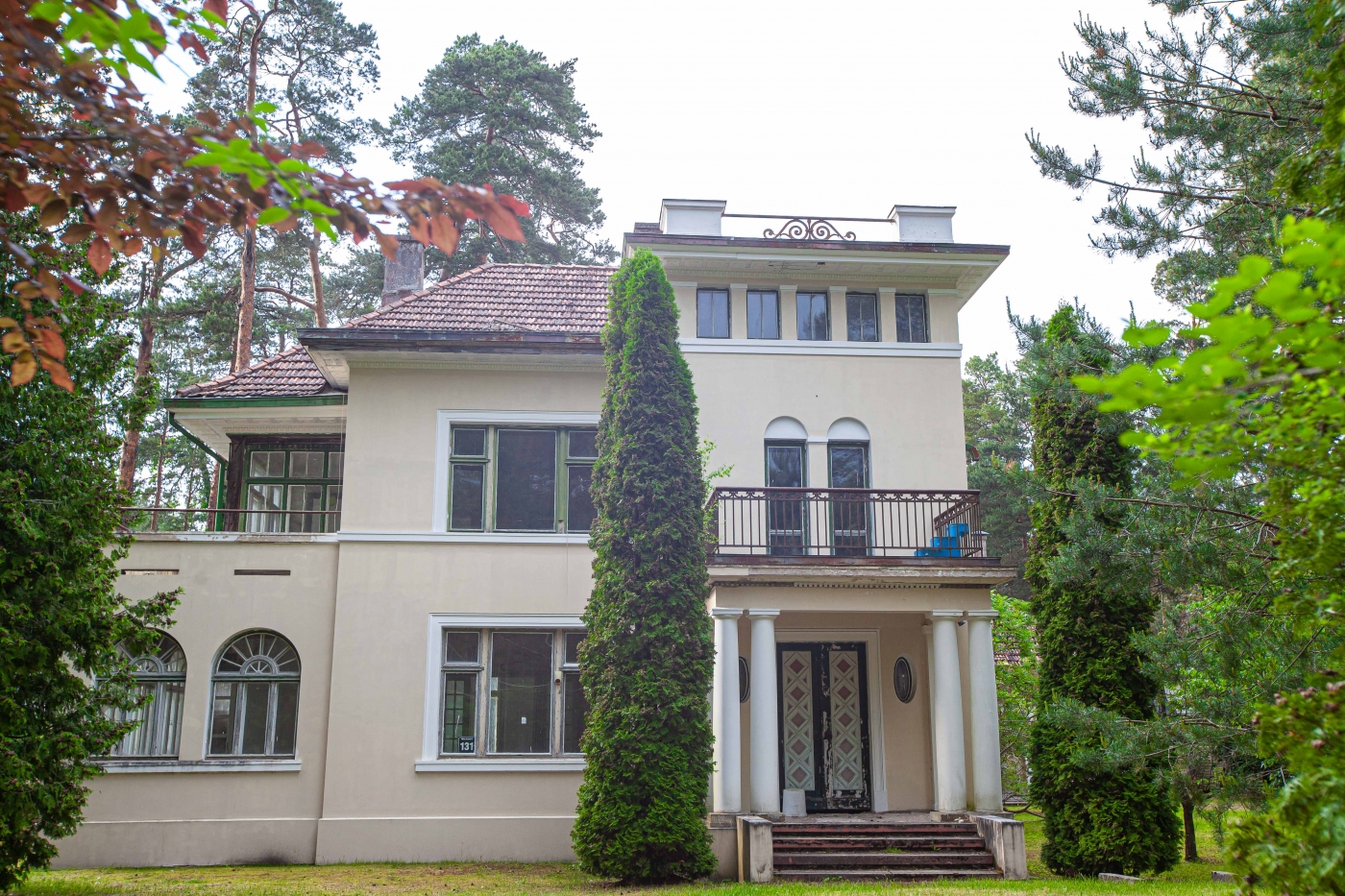 23. Bulduru prospekts 130
National monument of architecture. The building was designed in the National Romantic style, substituting the traditional veranda on the southern side with two polygonal glass structures. It was once the residence of architect Indriķis Blankenburgs (1887–1944).
Indriķis Blankenburgs was the head of the Construction Office of the School department at the Ministry of Education of Latvia. He has designed many school buildings throughout Latvia, several of which have been recognised as architectural monuments.

24. Meža prospekts 103A
Architectural monument. The building was constructed in 1947 according to the design created by architect Aleksejs Dogadkins, intended as the summer house of Professor Aleksandrs Šmits (1892–1978).
Aleksandrs Šmits was a Latvian biochemist. Having studied the chemistry of vitamins and the technology of their clinical application and production, he developed a method for obtaining ascorbic acid concentrates from tree needles. He Introduced a simplified insulin production system and industrial synthesis of ascorbic acid. 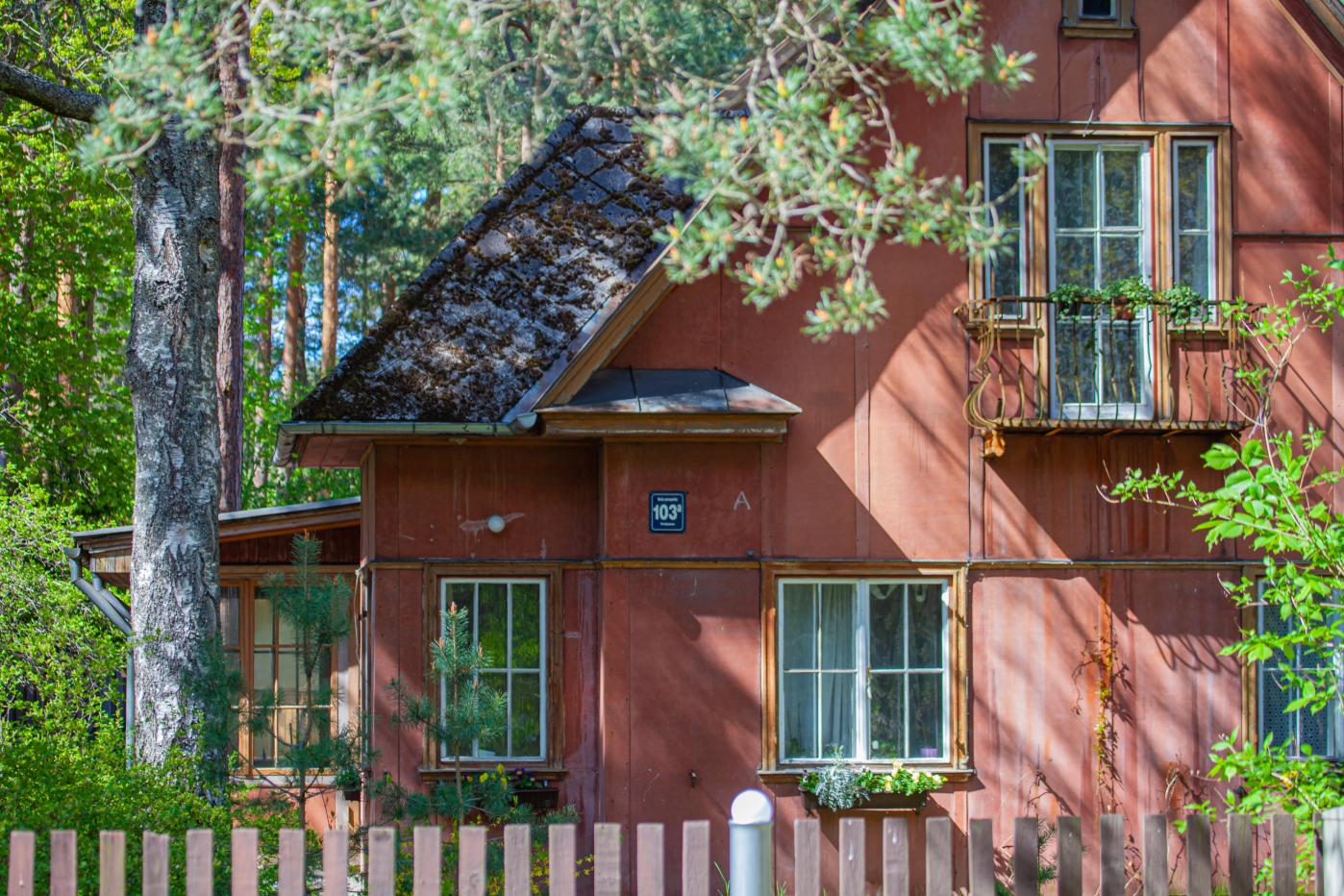 25. Meža prospekts 58
National monument of architecture. The building was constructed in the 1930s after the project by architect Teodors Hermanovskis and is an important example of Functionalist architecture. Currently the building is being employed for diplomatic needs of the Embassy of the Kingdom of Denmark.

26. Meža prospekts 50
National monument of history. The building was designed by architect Aleksejs Dogadkins. Since 1939 it was the residence of doctor and Professor Pauls Stradiņš (1896–1958).
Pauls Stradiņš was a Latvian surgeon and health care organiser, and a professor at the University of Latvia and Riga Medical Institute. He created a private collection of medical history materials, which became the basis for the creation of the Museum of the History of Medicine. 27. National Tennis Centre “Lielupe” (Oskara Kalpaka prospekts 16)
The closed hall of the tennis centre was built in 1989, forming the National Tennis Centre “Lielupe”, which gradually became a prestigious tennis base not only in Latvia, but also throughout the former Soviet Union. This centre has hosted many international tournaments, European Championships, Goodwill Games, Davis Cup competitions and tournaments with the participation of world tennis players. Since 1992, the centre has a national sports base status.
After its reconstruction in 2019, the Tennis Center "Lielupe" can accommodate 400-500 players per day and provide more than 50 international tournaments of various levels a year. The hall has four tennis courts, three squash courts and a beach tennis court. The outdoors facility consists of nine tennis courts, eight of them with clay surface. One of the soft surface courts is equipped with spectators' podiums and appropriate lighting for competitions.

28. Vikingu iela 12/14, the pier by the river
The pier is managed by the Jūrmala Port Authority. It offers a beautiful view of the river.

29. Vikingu iela 6 (Latvian Yacht Club)
The Latvian Yacht Club was founded in July 1924, and three years later it already was the leading club in the Republic of Latvia by the numbers of both members and vessels. A large majority of government officials, diplomats and leading business owners numbered among the members of the Latvian Yacht Club. In 1925 the Latvian Yacht Club acquired a plot of land near the Lielupe railway bridge and constructed the club building, a yacht mooring facility, kitchen and several guest rooms, as well as a yacht slip – a structure for lowering and lifting the yachts out of the water. By 1940 Latvian Yacht club had 498 members. It organised a wide range of sports and social life activities, participating in local and international events with considerable success.
The territory of the yacht club currently includes a territorial unit of the Murjāņi Sports Gymnasium "Specializētā airēšanas sporta skola" ("Specialized Rowing Sports School").