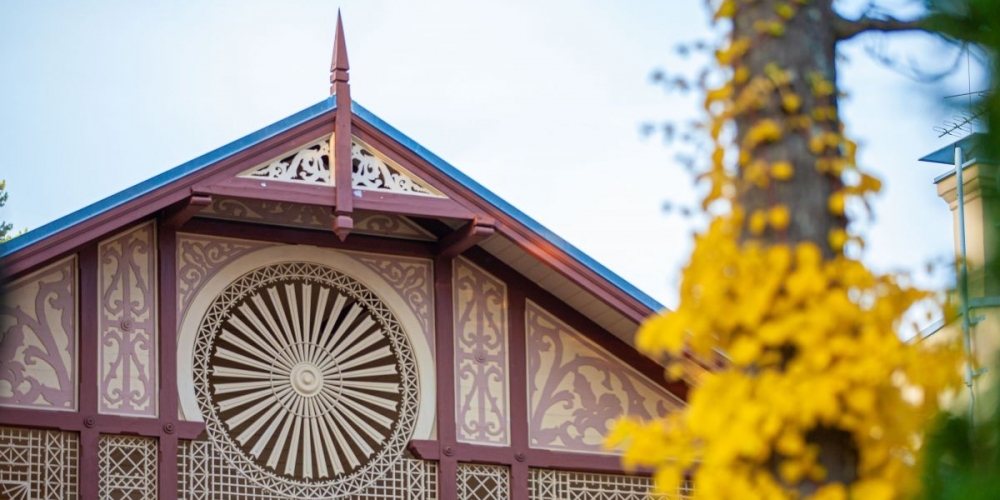 Nothing compares to leisure time spent in a meaningful manner. Jūrmala invites on tours that will help to discover the secrets of the city. Specially prepared walking routes span Bulduri, Lielupe, Buļļuciems, Vecdubulti and Dubulti. Orientation games like “Romance of the Resort in Bulduri” and exploration of the vicinity of Majori for schoolchildren “Walk and Explore Jūrmala” are also available.

You are welcome to download maps with object descriptions and pictures on your smart device or print them out at home! Also, you can open them in the Google Maps app. Each route shows the length of the walk in kilometres and the estimated time in hours, as well as the types of road paving. All one needs besides that are comfortable shoes, a good mood, and a reliable travelling companion. Even if you think you already know Jūrmala very well, these specially designed routes will guarantee new discoveries.

Bulduri: The Realm of Flowers and Wood Carvings
Look for the route HERE.
The almost four kilometres long route with 27 attractions takes one to two hours on foot and leads only along asphalt roads. The guide rich in pearls of wooden architecture also includes such points of interest as Līvu Akvaparks, Jūrmala Hospital and Jūrmala Theatre. The most attentive visitors will notice a summer cottage that reflects the influence of the Eastern culture.

Lielupe: Pearls of Historical Architecture and Destinies of Remarkable People
Look for the route HERE.
The approximately seven kilometres long route with 26 attractions takes two to three hours and leads along the beach – in the stage from Lielupe Lighthouse to Ragakāpa Nature Park, – and asphalt roads. The guide includes summer cottages of great Latvian scientists, composers, artists, and patrons, including the house of doctor Pauls Stradiņš. Architecture enthusiasts will notice Art Nouveau, neo-Gothic, National Romantic, Neoclassicism and Art Deco styles on a single walk.

Buļļuciems: Harmony of Ragakāpa nature park and Jūrmala seaside
Look for the route HERE.
The almost eight kilometres long route with 12 attractions takes two to three hours and leads along the beach, forest paths, paths paved with wooden planks and small asphalt paved streets. Wilderness and an exploratory walk with an opportunity to see the beautiful surroundings of the mouth of the Lielupe river on the Baltic Sea coast and to learn the history of fishing in Buļļuciems. Why was this part of Jūrmala once called "Australia"? Look for an answer on the route.

Vecdubulti: The historical centre of Jūrmala
Look for the route HERE.
The approximately three kilometres long route with 30 attractions takes a little less than two hours on foot and leads only along small asphalt paved streets. The guide saturated with attractions and rich in woodcarvings will help to get acquainted with the historical centre of Jūrmala, which is over two hundred years old. The route also includes the Art Station “Dubulti”, the only contemporary art space in an operating railway station in Europe.

Dubulti: The centre of creative intelligentsia and aristocracy
Look for the route HERE.
The approximately three kilometres long route with 18 attractions can be walked in approximately two hours and leads along gravel and asphalt roads. The guide will introduce to the bathing history in Dubulti and the literary heritage. Although only slightly more than ten attractions are marked on the map, Dubulti boasts approximately 70 monuments of architecture, art, and history.